AFRICA/CENTRAL AFRICA - Instability and general violence: the Church's commitment to solidarity and peace 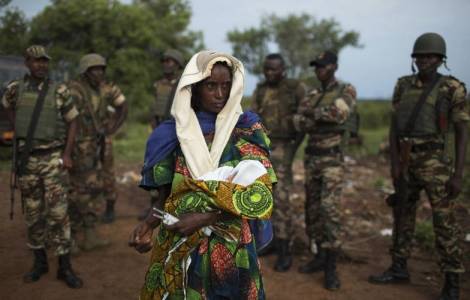 Bangui (Agenzia Fides) - Insecurity reigns in the Central African Republic: fighting among rebel groups continues even in the capital Bangui, until a few days ago it was an island of relative tranquility. In recent days, the police, assisted by the forces of Minusca (the UN mission in Central Africa) clashed with groups of militiamen who control PK5, the neighborhood of the capital where the Muslim community lives. Former fighters who have become bandits are harassing traders and local inhabitants, imposing bribes on any form of activity.
Hence the intervention of the police and the clashes that have caused at least three dead and seven wounded.
"The clashes in the capital – explains to Agenzia Fides Jesuit priest Barwendé Médard Sané, director of the Catholic University Center in the capital, are serious, but represent an exception. Life is relatively normal in Bangui. The situation of young people who find it hard to complete their studies and find it difficult to find a job is of particular concern. Many of them live on the street without doing anything all day".
The most worrying situation is that of the peripheral provinces. "Since the dissolution of the Seleka movement and the anti-Balaka movement (born in opposition to Seleka) - observes Father Médard Sané - at least 14 factions have emerged that continuously clash with each other for the control of the territory and mineral and natural resources (gold, uranium, timber). This creates a climate of general insecurity that has serious consequences on the civilian population".
The government led by President Faustin-Archange Touadéra, born after the 2015 elections, works for national reconciliation, the disarming of armed groups and the return to the rule of law. "In these two years - the Jesuit continues - the government has worked hard to pacify the country. It has met many difficulties. Fortunately, the international community supports it: the United Nations still has more than 13 thousand men in the country".
Even the Catholic Church is very active. Since 2013, when the civil war broke out, dioceses, parishes, religious communities have welcomed and helped thousands of refugees. They have offered them a safe place, food, clothes, medical and psychological assistance. The Jesuits continue to offer assistance to students in their university center and, through the Jesuit Refugee Service, help over 400 thousand refugees, single mothers and child soldiers. The local Church is also engaged in the work of reconciliation, collaborating with other religious confessions. "The Catholic community is doing its best. Cardinal Dieudonne Nzapailinga, Archbishop of Bangui, Muslim Imam Umar Kobine, and Protestant Pastor Nicolas Nguérekoyame have created a common platform for sensitizing communities to peace and coexistence. We believe that the country can regain its stability". (EC) (Agenzia Fides, 3/3/2018)

AMERICA/HONDURAS - "Migrants, prostitutes and marginalized groups are the new lepers"