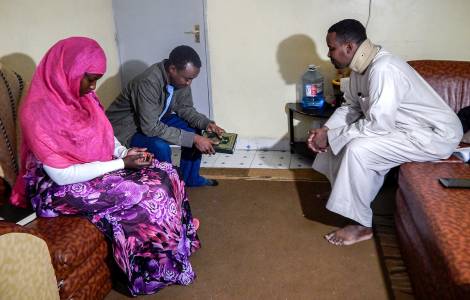 2023-01-04
Al-Shabaab violence continues: "apostate militias and soldiers" in the crosshairs

Mogadishu (Agenzia Fides) - A small community of Somali Christians lives in Mogadishu. There are about thirty elderly people. They live hidden for fear of the reprisals of Islamic fundamentalists. But, they consider their faith as the most precious gift. Fr. Stefano Tollu, military Chaplain of the Italian contingent of Eutm Somalia, the formation and training mission financed by the European Union, managed to get in touch with one of them in recent days. A quick meeting, in order not to arouse suspicion and not to draw too much attention, but very intense and full of human and religious meanings.
"I had the opportunity to meet Moses (invented name, ed)", says Father Tollu to Agenzia Fides, already a Salesian missionary, now a priest incardinated in the diocese of Faenza and serving in the Military Ordinariat for Italy. "He is a Christian who grew up in the reality of the Italian Protectorate and then in independent Somalia, still very tied to our country. Many consider him the spokesman of the Somali Catholics. He defines his community as endangered".
In Somalia, a version of Sufi Islam has coexisted for centuries with other faiths. For the past twenty years, however, an intolerant version of the Koranic faith has taken hold. Al Qaeda and its local branch al Shabaab are a continuing threat both for non-fundamentalist Muslims and Christians. In recent months the Islamic State has also appeared in the country, which has created the first bases in Puntland.
However, the danger arrives even within the Christian families themselves. It is still Fr.Tollu who speaks: "Moses told me that 'those born in the' 90s, have become intolerant and do not understand their elders who profess Christianity. Therefore the elders flee, go away from their children and grandchildren". Moses showed the Italian priest a list of Christians who died recently, some for natural causes, others for violent causes. "I promised him I would remember them in the Holy Mass" - said the Chaplain, recalling that, as reported by the Somali Christian, "some were killed by their children's children". "Violence is in homes and we, who are few, we risk our lives every day", Moses told him. The few faithful Somali Catholics cannot have continuous spiritual assistance: "At the moment - concludes Father Tollu - there are no security conditions for a priest to carry out his pastoral service in Mogadishu peacefully. I hope that in the future, once the country has been freed from terrorist infiltration, it will be possible to recreate the minimum conditions for the Christian presence in the city. At the moment I promised to pray for them during Mass. We are united in daily prayer, we are brothers in Christ even if today they are forced to hide their faith". (EC) (Agenzia Fides, 28/2/2018)I