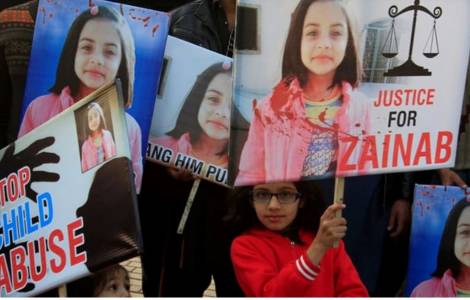 Lahore (Agenzia Fides) - "Pakistan has finally broken a taboo, at least for now. This comes after the denunciation of sexual abuse, violence, rape and murder against thousands of minors. Here there is a culture of silence and shame which are deeply rooted", says to Agenzia Fides Fr. Mushtaq Anjum, a Pakistani Camillian missionary. "However - continues the priest - the recent case of young Zenaib Ansari, a girl from Kasur, in Punjab, has literally shocked the country. And in civil society, processions and demonstrations have multiplied to demand justice and to put an end to impunity".
Many famous Pakistani women took part in this campaign against child abuse, and shared their stories on social media using the hashtag #justiceforZainab. The other hashtag #MeToo raised the veil on many other cases of violence: actress Nadia Jamil revealed to have suffered sexual abuse for the first time when she was four years old. "I was told not to talk about it out of respect for the honor of my family, but now I am not ashamed for myself or for my children. I am a proud, strong, loving, survivor", said Jamil. Maheen Khan, a Pakistani high fashion designer, said she was abused by the mullah who came to teach her the Qur’an: "I froze in fear day after day".
Frieha Altaf, actress and model, wrote that she was sexually abused by the family cook from the tender age of 6 and added that "the only shame in these cases is keeping silent".
Fr. Mushtaq explains to Agenzia Fides: "Pakistani society protects honor at the expense of justice. Shame and humiliation prevent people from exposing themselves and denouncing these inhuman illnesses".
There are still few reports of sexual violence in Pakistan. In 2016, the total number of reported child abuse cases was 4,139, or around 11 new cases reported per day. In the first six months of 2017, according to "Sahil" organization, committed to the protection of minors, a total of 1,764 cases of child abuse were reported across Pakistan. But this is only the tip of an iceberg and most of the violence remains secret and unpunished.
"People are ashamed to talk openly about this crime. Greater awareness is needed. People need to be more vigilant and protective of their children. Often the offenders are within the family or neighborhoods as they are trusted", says the Camillian.
"Furthermore, Pakistani society has to urgently review the general system of values. The Government, the judiciary and the political system must orient themselves towards the exclusive protection of the human being. It is more than ever necessary to educate society, strengthen the judicial system and set in motion educational and political tools to transform the current mentality, in the direction of raising one’s voice and protecting the weak and the young", concludes the priest. (MA/AP) (Agenzia Fides, 25/1/2018)