ASIA/PAKSTAN - Christians mobilize to help those injured by the attack on Quetta, the government is absent 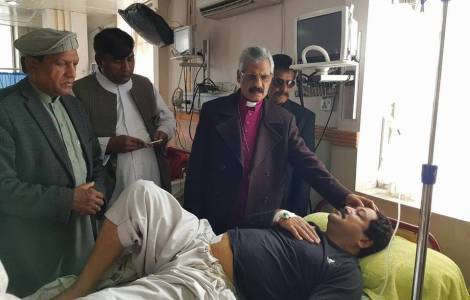 Karachi (Agenzia Fides) - An appeal not to forget the victims of the recent attack on the Methodist church of Quetta - devastated by a terrorist attack on December 17 - and a fundraising to help the affected brothers: this is the initiative launched by Catholic Archbishop Joseph Coutts, head of the community of Karachi, who invited the faithful to a commitment of solidarity. Speaking to Fides, Archbishop Coutts said: "We have already sent 300,000 Pakistani rupees (2,270 euros) to the Methodist Church through the Catholic Bishop of Quetta and I wrote a letter to my parish priests to raise funds to support our brothers and sisters in this moment of suffering and necessity".
He also said: "It is not just about the number of dead, injured and the damage to the construction of the Church". There is much more to the loss: one cannot compensate mourning and pain with money, but our small contribution will be useful for those in need".
"I learned that many of the injured are still in delicate situations and need better care and treatment, and we know it is expensive to receive treatment at our private hospitals", adds Archbishop Coutts, urging priests to launch new appeals during Sunday Mass to raise funds for those affected by the attack on Quetta, which killed 14 and injured 56.
As Fides learns, even Bishop Samson Shukardin OFM of the Catholic diocese of Hyderabad addressed the same appeal to priests and faithful to "generously contribute to raising funds to support those affected in Quetta".
Protestant Pastor Simon Bashir, who has the pastoral responsibility of the community in Quetta speaking to Fides notes: "We are going through difficult times, especially the injured are in difficulty, many are transferred to other private hospitals in Quetta, Karachi and Multan for more appropriate medical treatment". Treatment is expensive and different church groups and non-governmental organizations contribute financially: "Until now, all the donations I have received are used to pay for the care of those injured. Their full recovery is our priority", he says. The government of Baluchistan has assured aid for the maintenance of the church, but "until now the promised contributions have not yet been paid, not even compensations to the victims or the wounded", the Pastor tells Fides.
Sharing some specific cases, Pastor Simon says: "One of our choir members is among the most seriously injured, has wounds in the abdomen and the special treatment that guarantees an artificial digestion process has very high costs: 1,500 rupees (11,5 euro) per day. The daily expense for another injured Christian is 4,000 rupees a day (30.25 euros) due to a broken leg. One child is at Aga Khan Hospital in Karachi for further treatment. Another is at the Bolan Medical Center in Quetta because he is in intensive care units. We are helping to cover medical expenses for about 30 patients who are in this situation".
For this reason, the expenses for the Church building have, for now, moved to the background. Pastor Simon notes: "We have a temporary set up for electricity, most of the lights are still damaged, and we have lost many of the benches, windows, doors, fans, carpets, radiators, useful for the winter season".
"We also need to put barbed wire and build higher walls for our safety now - the CCTV system is not currently active because it is still in the hands of the security forces for the investigation", he concludes. (AG) ( Agenzia Fides, 10/1/2017)