AMERICA/MEXICO - Two dancers of the feast of Our Lady of Guadalupe killed, meaningless violence 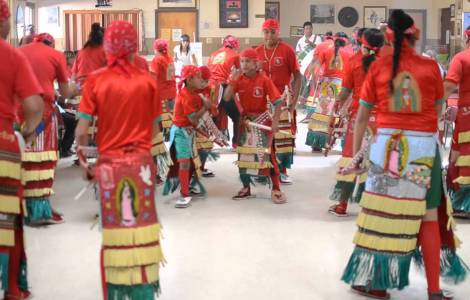 2021-05-03
June 6 elections: bishops ask for the best option, beyond the clashes between parties and candidates

2021-04-20
The Bishops: "It is urgent to work together to find solutions to current emergencies, there is no time for divisions!"

Ciudad Juárez (Agenzia Fides) - "There is no respect for anyone, it is the extreme of evil, how dare they?" asked the Bishop of the diocese of Ciudad Juárez, Chihuahua (Mexico), Mgr. José Guadalupe Torres Campos, in a brief meeting with the local press after learning of the murder of two "matachines", dancers of the feast in honor of the Virgin of Guadalupe, on December 12, while they were preparing and doing rehearsals.
The Bishop stressed that this event is a reason to increase our faith, but it is sad and deplorable that these signs of violence and death continue to occur in the city.
"These murders are not like the others, although it must be said that no homicide is good, but these people were not at a party or getting drunk, they were matachines who were dancing for the Virgin of Guadalupe, in an act of faith and love, this suggests that there is no longer any respect for anything or anyone", he concluded.
According to information from the press of Ciudad Juarez, at the beginning of this week, six people were killed in just two days. What is shocking is that there are no clear or defined reasons, it can almost be said to be a meaningless violence.
The denunciation, complaint and protest of Mgr. Torres Campos fall at a difficult time for Mexico, as the draft law on internal security is being discussed (see Fides 7/12/2017). Through the Episcopal Commission for Social Pastoral Care (CEPS), the Bishops have complained about the failure of security policies in the country: "Some regions have been hit by humanitarian crises that require truly trained police officers, able to provide internal security, leaving the army its duty to guarantee national security".
The CEPS yesterday published a statement entitled "With decision we build peace, enough with false security", which presents the position of the Church in this regard: "Legislative actions are necessary to mark a critical path that resolves the causes, but also to avoid policy proposals such as the presence of armed forces with police functions", it is also hoped that such legislative measures "can reach the consensus of all political and social forces, in order to establish national, state and municipal security structures that are effective and respectful of the rights of all". (CE) (Agenzia Fides, 14/12/2017)