AFRICA/NIGERIA - The drama of displaced people caused by Boko Haram 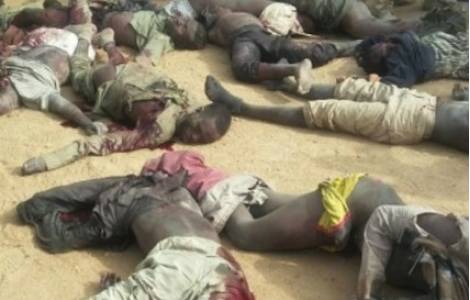 2020-11-30
At least 110 dead in Nigeria after suspected Boko Haram attack; there is still no news of a kidnapped priest

2020-11-13
Bishop of Sokoto: "Protests are an opportunity for the Church to guide young people to the path of dialogue"

Abuja (Agenzia Fides) - There are also two catechists among the people killed in an explosion that occurred on 11 December in Minawao camp in Pulka, in the north-east of Nigeria, which welcomes Nigerian refugees repatriated from Cameroon. This was reported in a note sent to Agenzia Fides by Fr. Gideon Obasogie, Director of Social Communications of the diocese of Maiduguri, capital of Borno State, in northern Nigeria, where for years the guerrillas of Boko Haram have been raging, the Islamist sect that has declared its affiliation to the Islamic State.
"We gathered that the Boko Haram elements made their way into the returnees from the Minawao camp and exploded their suicide belt killing dozens including two Pastors (Catechists) from that community who had been appointed by the bishop of Maiduguri Most Rev. Oliver Dashe Doeme", writes Fr. Gideon. The Nigerian army, however, said that the explosion was not caused by a suicide attack but by the explosion of a mortar shot fired against the camp while the victims are four."There are over 91,000 people who left Nigeria to take refuge in Cameroon, but the hostilities encountered had pushed many to return to their Country of origin at the cost of exposing themselves to the violence of Boko Haram", says the priest. Many of these are accepted in camps like the one hit by last Monday's explosion.
Fr. Gideon emphasizes that this attack on innocent civilians, Boko Haram terrorists continue to rage against a hard-hit population.
"Since the Boko Haram ferocious campaign and occupation of most communities in the Northeast around the later part of 2014, life has really not been wonderful for the survivors and returnees", says the Director of Social Communications. "The Boko Haram fighters who moved out of sambisa forest, over ran must communities bordering the fierce Sambisa forest and tried to extend their counterfeit caliphate from Gwoza to the north through Pulka and Bama in Borno State. Then to the north of
Adamawa state through Madagali, Michika, Uba and Mubi"."With the help of God and the courage of our military men we saw a twist and the ruthless arm of terrorism was rolled back", says Fr. Gideon."Gradually, as days rolled into weeks and weeks into months, a considerable
number of our people have come home to settle and begin life anew. The destruction had been done and all we are left with is heartache and ulcer pains. The mere thought of the destructive acts of Boko Haram breeds heart attacks and spinal shocks. The rate of psychosis is alarming, my people now suffer from a wide range of disorders, heightened fear of the future and nervousness, which were all together alien in our land", says Fr. Gideon."The truth of the matter is that our people in the Northern part of Adamawa State that is under the Ecclesiastical circumscription of Maiduguri Diocese( Madagali, Michika, Uba and Mubi) are back in their communities. Their means of livelihood in this part of the globe, after the shift of the militants have become consistently challenging", emphasizes the priest. "The local governor has long declared a State of emergency on the Health sectors, we sincerely hope that this would be a snake oil to the challenging, dilapidating and seemingly total absence of health care facilities in Michika- Madagali axis of the State". "The Catholic Church is however, putting made-shift or mobile clinic to see to the immediate needs of our people", concludes Fr. Gideon. (L.M.) (Agenzia Fides 13/12/2017)