ASIA/PAKISTAN - A woman converts from Islam to Christianity: now she and her family risk their lives 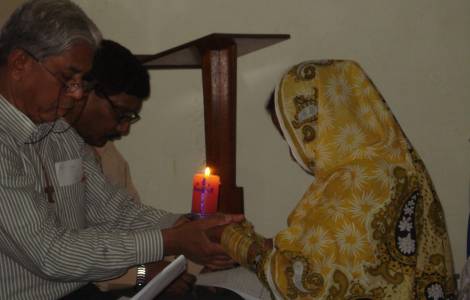 Lahore (Agenzia Fides) - A Pakistani woman from Punjab who has chosen to convert from Islam to Christianity has been threatened with death and forced to flee from her home, to take refuge in a secret place and is hiding out with her whole family.
Pakistani Christian lawyer, Sardar Mushtaq Gill, who fights the rights of Christians in Pakistan, told Fides that extremist groups were organizing to execute the "apostate" woman and the entire family, composed of her husband, Emmanuel Ghulam
Masih, and two young children. The woman is pregnant with third child. Threats came first of all by the Muslim family of the woman, who married Christian Emmanuel Ghulam Masih. Family members began talking to Masih's family, and threatened to convince the woman to return to Islam.
The Christian couple turned to lawyer Gill who, noting the risk of indiscriminate violence and even of an extrajudicial killing, preferred to help the two find a new accommodation and hide.
Interviewed by Fides, lawyer Gill said, "The State should protect and save those people exercising their freedom of conscience. This is a case of intolerance and violence. If the State does not guarantee them adequate security, it is difficult for them to survive. Marriage is a sacrament between two people and should be accepted by the woman’s Muslim family. It is also her free choice to convert to the Christian faith".
Pakistan does not foresee the offense of "apostasy" at a constitutional level, but contemplates it for blasphemy. Apostasy - which is a criminal offense, punishable by death in countries like Afghanistan, Iran, Malaysia, Maldives, Mauritania, Nigeria, Qatar, Saudi Arabia, Somalia, Sudan, Arab Emirates and Yemen – is punished according to Islamic law, in front of the Sharia federal courts.
In 2007 some religious parties in Pakistan proposed a law that punished the offense of apostasy with the death penalty for males and life in prison for women, but did not pass in Parliament.
There are numerous cases of extrajudicial killings of "apostates" in Pakistan: in a case similar to that reported by lawyer Gill, in 2015 the couple of Lahore Aleem Masih, 28, and Nadia Din Meo, 23, were killed cold-bloodedly because the Muslim woman had converted to Christianity after marriage.
As some Pakistani priests refer to Fides, there are cases of "crypto-Christians", people who convert in secret to practice their faith in Christ. Fr. Mario Rodrigues, Director of the Youth Pastoral Care in Karachi, tells Fides: "There are stories of young Muslims who intend to convert to Christianity in Pakistan; but if they did it openly, every Muslim could feel the right to kill them. For this reason, cases of conversion from Islam to Christianity are very rare and some convert in secret. When the grace of God illuminates a heart and the choice is made, a real calvary may begin. Only Christ can give strength to face the trials and sufferings that come to light". (PA) (Agenzia Fides, 27/9/2017)

ASIA/PAKISTAN - Fake news about the rape and religious conversion of a Christian girl, and the attack on a church: damage to religious minorities