ASIA/PAKISTAN - Asia Bibi nominated for Sakharov Prize 2017: the blasphemy law in the spotlight 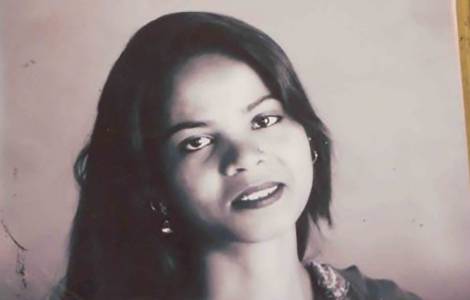 Lahore (Agenzia FIdes) - Asia Bibi, the Christian woman sentenced to death for blasphemy and in jail since 2009, has been nominated for European Union’s high-status award edition 2017 of the prestigious "Sakharov Prize for Freedom of Thought". The Prize is an initiative of the EU Parliament and is awarded to individuals or groups battling to defend fundamental human rights. Among this year's nominees are: Aura Lolita Chavez Ixcaquic, a Guatemalan human rights campaigner, Selahattin Demirtas e Figen Yuksekdag, co-presidents of the Kurdish Peoples' Democratic Party (HDP) in Turkey; groups and individuals representing the democratic opposition in Venezuela; Dawit Isaak, a Swedish-Eritrean playwright, arrested in 2001 by the Eritrean authorities; Pierre Claver Mbonospa, a Burundian human rights activist.
Peter Van Dalen, a member of the European Conservatives and Reformists Group (ECR) in the European Parliament, who proposed the candidacy of Asia Bibi, explained that "Asia Bibi’s case is of symbolic importance for others who have endured simply for expressing freedom of religion".
"In her we see the situation of the whole Christian community. Her case is tragically indicative of the insecurity faced by all minorities when it comes to their fundamental human rights", notes Kaleem Dean, an intellectual and Pakistani analyst, in a comment sent to Fides. "If she succeeds in being awarded the Sakharov Prize, Asia Bibi would receive 50,000 Euros. Yet at stake is more than money, (though, of course, she does deserve to be compensated for the damage caused): the recognition of freedom of religion in Pakistan is at stake", he continues.
"The government - he says - is burying its head in the sand, in order not to hear the anguished cries of minority communities". In particular her case brings the notorious "blasphemy law" into play: "Blasphemy charges are an instrument of what has become state oppression against minorities. Governors should have the courage and vision to reform the blasphemy law", concludes Dean.
"Pakistani Prime Minister Shahid Khaqan Abbasi, attending these days the 72nd General Assembly of the United Nations, in a cowardly manner refused to speak of the blasphemy law in Pakistan, saying only that the Pakistani parliament is the body responsible for amending laws, says to Fides Nasir Saeed, director of CLAAS "Center for Legal Aid, Assistance and Settlement", committed to the defense of religious minorities in Pakistan.
For years - says Saeed - "the issue has been a taboo, and even the Prime Minister of Pakistan is afraid to comment. The role of Prime Minister is also to ensure that laws are not abused, but unfortunately this blasphemy law is regularly exploited as a vengeance tool to pursue innocent people. In recent years the abuse of the blasphemy law has increased. It is now considered a simple, fast and inexpensive way to resolve private disputes and punish their rivals".
"The blasphemy law - Saeed concludes - is not in line with international human rights standards. And its abuse raises further violations of international law. The Government of Pakistan does not address such an important issue, although it is a question of life and death".
CLAAS director recalls that there are reports of a large number of blasphemy cases based on false allegations and on the absence of judicial investigations: "This is why we call on Prime Minister Abbasi to put the issue on the agenda of his government and bring it to Parliament", he concludes. (PA) (Agenzia Fides, 26/9/2017)

ASIA/PAKISTAN - After 12 years in prison: A Christian sentenced to life imprisonment for blasphemy acquitted on appeal