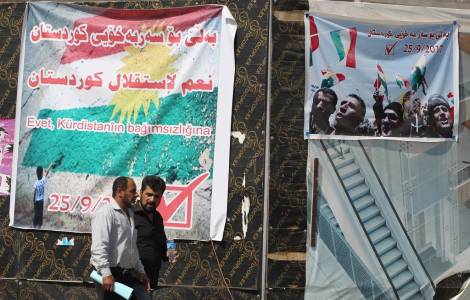 Erbil (Agenzia Fides) - The Chaldean Church "is not responsible" for the positions expressed by parties, organizations and armed factions led by members of local Christian communities, regarding the situation of Iraq and its current problems. In this delicate phase - reads a text released by the official media of the Patriarchate, and sent to Agenzia Fides - "Everyone is personally responsible for their own statements and actions, and the positions of individuals and militants belonging to the Christian communities do not in any way bind the other baptized people from all over the Country, from Basra to Zakho".
The Patriarchal pronuncement takes place at a critical moment: today, Monday, September 25, the authorities of the autonomous Region of Iraqi Kurdistan have opened the polls to proclaim its independence from the central government of Baghdad. In the quoted document, referring to the independent referendum, the Chaldean Patriarch invites all those concerned to assume a responsible attitude and proceed on the path of "courageous dialogue" with the aim of safeguarding the good of the people "who have so much suffered for wars and violence in recent years".
On the eve of the referendum, the authorities of the autonomous region of Iraqi Kurdistan put in place another move to win the support of minorities, including Christian ones: the Supreme Council for the referendum, during a press conference on Sunday, September 24, presented a 16-point political document in which commitments are made on the full guarantee of personal and community rights that will be assured in independent Kurdistan to all national and religious components in the region. In the text, which seeks to assert and affirm the ethnic, religious and cultural pluralism of Kurdish society, article 2 also promises autonomy and administrative decentralization in the areas of the region where Turkmen, Yazid and Chaldean Christians, Assyrians, Syrians, and Armenians have their own historical root. The document, which should be approved in the first session of the Independent Parliament of Kurdistan, also promises the elimination of any discrimination on an ethnic or religious basis, the adhesion of the new State to international conventions on the protection of the rights of ethnic, linguistic and religious minorities, and the involvement of all social, ethnic and religious components in the bodies called upon to draft the new Constitution.
The various acronyms and local political organizations animated by Assyrian, Chaldean and Syria militants reacted unequally to the document prepared by the Referendum Committee: the Assyrian Democratic Movement (Zowaa) reiterated that the promises contained in the document are not sufficient to ensure the real protection of the rights of the various religious and ethnic components, while all spokespersons of Christian acronyms at the referendum thanked Masud Barzani, President of the autonomous region of Iraqi Kurdistan, for having also met their demands regarding the future administrative autonomy to be guaranteed to the areas of historic settlement of Christian communities. (GV) Agenzia Fides, 25/9/2017)