AFRICA/TOGO - The Bishops: "Let’s go back to the 1992 Constitution to resolve the crisis" 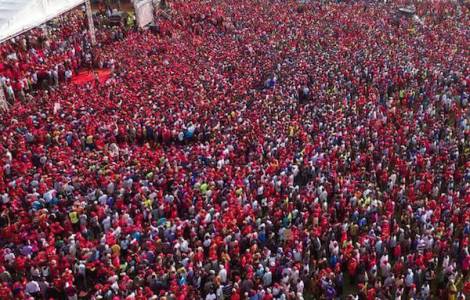 2021-10-04
Churches closed until mid-October, but missionaries do not stop solidarity

Lomé (Agenzia Fides) - "Constitutional reforms are of particular importance, without which it is impossible to bring peace and social cohesion in our country", write the Bishops of Togo in the pastoral letter on the Country's situation, shaken by strong popular protests which call for a limitation on the number of presidential mandates in order to allow a turnover with regards to the highest political sphere of the State, led by Faure Gnassingbé Eyadéma, son of General Gnassingbé Eyadéma since 2005, who ruled for 38 years until his death in 2005 (see Fides 15/09/2017).
"The Episcopal Conference of Togo - continues the document sent to Agenzia Fides - expresses a great deal of anxiety due to the repression of demonstrations as well as the incitement to ethnic hatred spread through social networks".
The Bishops condemn the violence committed by the security forces "on the populations of some places, after the demonstrations of 6 and 7 September, and the excessive use of force against their fellow citizens, in some cases even within their homes". The pastoral letter also calls on the army to remain neutral "avoiding any intrusion into the political debate, in accordance with the Constitution". After exhorting political leaders, majority and opposition, and citizenship not to give in to the calls of violence, the Bishops conclude by inviting everyone to pray for peace.
Commenting on the pastoral letter, His Exc. Mgr. Nicodème Anani Barrigah-Benissan, Bishop of Atakpamé, who was President of the Truth, Justice and Reconciliation Commission, recalled that the Commission he presided over in February 2012 had delivered a report of 68 recommendations to President Gnassingbé "to consolidate democracy and pacify the social climate", which were not put into practice.
"We Bishops think that we need to initiate a debate on the reforms in accordance with the 1992 Constitution, to resolve the situation so as to move forward", he concluded.
The 1992 Constitution was approved following a wave of protests that had forced Gnassingbé Eyadema, the father of the current President, to limit the maximum number of presidential mandates to two. Ten years later, Parliament eliminated the limit of mandate to allow Faure Gnassingbé Eyadéma to candidate himself again, after it had already carried out two mandates. (L.M.) (Agenzia Fides, 18/9/2017)