ASIA/IRAQ - Christians divided on the Kurdish independence referendum. The Chaldean Patriarchate: there is a risk of armed conflict 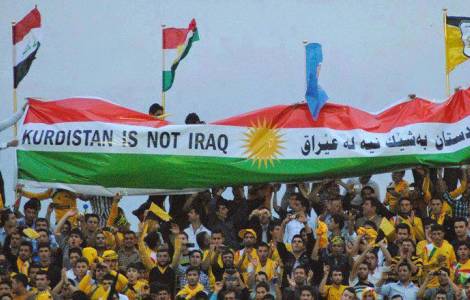 2022-03-14
Iranian rockets against US base in Erbil. The Chaldean Patriarchate: the stalemate in the formation of the government puts the country at risk

2022-02-15
Farewell to Mar Addai II, Patriarch of the Ancient Church of the East

Baghdad (Agenzia Fides) - While September 25th approaches, date of the referendum announced by the government of the autonomous Region of Iraqi Kurdistan to sanction its independence from Baghdad, there are contrasting signs from the local Christian communities with reference to the referendum, which attracts the attention and also the concern of international observers. In recent days, a gathering of 1500 people in Ankawa, the suburb of Erbil, inhabited largely by Christians, was presented by local media as a sign of the support offered by local Christians to the Kurdish Independent referendum. At the meeting, held at the hall of the Babylon Foundation, representatives of political parties and social organizations took part, and the speakers' interventions exalted the contribution that Christians could bring to the construction of the new independent Kurdistan.
A similar pro-referendum demonstration was organized in the Christian village of Tesqopa, about 30 kilometers from Mosul, with the intent of expressing support for the independence of Kurdistan by local Christian communities and minorities of the Yazidis and of the Shaback. In reality, it remains to be verified whether these demonstrations really represent the most widespread sentiment among Christians of that region, or whether they are rather the result of small group initiatives coordinated with the propaganda apparatus set up by the government of the autonomous Kurdistan Region for of the independent referendum. The city of Tesqopa, the theater of the recent pro-referendum demonstration, is firmly in the hands of Kurdish Peshmerga militias, who refer to the regional government of Erbil. Sources related to the Kurdistan Patriotic Union have reported that a contingent of 12,000 Kurdish Peshmerga soldiers is present in the Nineveh Plain region, officially to keep order and prevent unilateral initiatives on behalf of many militias in the area, including the so-called "Christian" ones such as the Babylonian Brigades, who in the recent past had expressed themselves against the independent referendum.
The concentration of Peshmerga militias in adjacent areas in Mosul is one of the factors that contribute to confirming the voices of those who fear a possible decline of tensions between Kurdistan's regional government and the Iraqi government. Political leaders in Baghdad have also launched clear signs that they will not accept the creation of a Kurdish State in northern Iraq through a referendum unilaterally proclaimed by the regional government. On Tuesday, September 12, the parliament in Baghdad voted to officially declare the referendum of 25 September null and void. Turkey and Iran have also made it known that referendum consultations will really take place, and the effects could be serious and destabilizing throughout the area.
In this context, Chaldean Patriarch Louis Raphael Sako expressed his concerns in a statement that has the value of an appeal to the Iraqi central government and Kurdistan's regional government in order to resume dialogue with courage. The Iraqi political scene, after the fall of the Saddam’s regime - points out the patriarchal appeal sent to Agenzia Fides - was dominated by the use of tactics, defense of party interests and the race to acquire or defend positions of force. It is in this progressive decline of the national political fabric, that the issue of the independent referendum on September 25 will be set. In this regard, the risk of an escalation of tension is also denounced by the Chaldean Church: "some" notes the appeal of Patriarch Sako "have already started playing the war drums: if there were a new military conflict, the consequences would be disastrous for everyone, and minorities would always be the ones to pay a high price". After having suffered during the jihadist occupation of Mosul and North-Iraqi areas, "everyone should be aware of the seriousness of the situation and hurry to support national reconciliation and peace before it is too late". In situations like this - the Patriarchal Communiqué notes - "war is never a problem-solving tool". Regarding the future of indigenous Christian communities and their varied views regarding the referendum, the Chaldean Patriarch notes that "We Christians are not able to assert our rights neither with the central nor with the regional apparatus, even because political and militia factions that are said to be Christian are actually far from the concerns of local Christian communities. And if another armed confrontation was to be opened in the region, this would certainly further reduce the Christian presence in those areas". (GV) (Agenzia Fides, 14/9/2017)