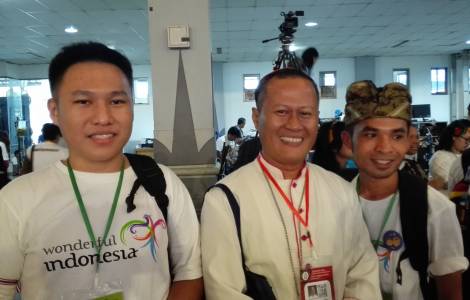 Yogyakarta (Agenzia Fides) – Gathered in workshops to talk with Bishops on matters such as respect for mothers, social ills such as drug addiction, corruption, abortion, poverty and the question of migrants, but also about new ways to proclaim the Gospel in Asia, a faith identity, mixed faith marriages: at least 2,000 young people from 22 different countries taking part in the 7th Asian Youth Day, in Indonesia 31 July to 6 August, experience “unity in cultural and religious diversity”, aware that “being religious means in itself being inter-religious”, according to Indonesian Jesuit Father Andreas Setyawan. In fact the participants at this Asian Youth Day, included 160 young Muslims who shared with enthusiasm and in the spirit of brotherhood the different activities at Jogja Expo Center, a large meeting modern centre offered free of charge for the event by the local government in Yogyakarta, a province of Indonesia ruled by Sultan Hamengku Buwono X. In these days the young participants visited churches, schools and communities taking part in meetings, debates and prayers, musical performances of various kinds: initiatives planned to help the young people realise their role as major players in building the common good and harmony in the society of which they are part. Asian Youth Day was also an opportunity to promote reciprocal knowledge among young Asian Catholics and Muslims: “This meeting strengthens bonds of understanding, dialogue, tolerance among young people of diverse faiths: tolerance does not mean being silent and bearing with one another, but rather forming and enriching personal relationships through sharing, dialogue, genuine friendship, working together, growing in reciprocal trust and esteem; it is a matter of interaction”, Fides was told by Rifqi Fairuz spokesperson of the young Muslims taking part who is a member of the National Gusdurian Network, and Indonesian movement inspired by Abdurrahman Wahid, known as “Gus Dur”. This year’s Asian Youth Day (modelled on the World Youth Days a brilliant idea of Saint Pope John Paul II first launched in 1985 ) included also moments of intense prayer, Eucharistic Adoration, celebration of the Sacrament of Reconciliation, Taizè model prayer-mediation. Filipino Bishop Joel Baylon in charge of the Youth desk at the FABC Federation of Asian Bishops’ Conferences, speaking this morning to all the young participants, highlighted the situations and changes facing young people in Asia today. 70 % of the young people in Asia, aged between 10 and 24 a total 1.1 billion (26% of the whole continent), considers “religion most important”.
Young Catholics in this context are “called to transform optimism into genuine Christian hope, in order to be themselves Christ’s gift to Asia and to the world”, the Bishop underlined. Asian Youth Day will close on Sunday 6 August with a solemn Mass, in presences of six Asian cardinals, numerous bishops from all over the world together with 20,000 faithful. Civil authorities present included Indonesian vice president Jusuf Kalla, a sign of the government’s institutional support for the event. (PA) (Agenzia Fides 5/8/2017)