AFRICA/SIERRA LEONE - The Bishops: Journeying towards peaceful and credible elections 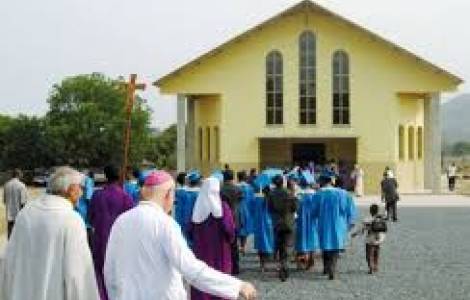 2018-06-08
"We want to collaborate with the new government, especially on education"

2017-08-29
Mudslide in Regent: mobilization of the West African Church

Freetown (Agenzia Fides) - "We call on all Sierra Leoneans, especially those who are of voting age, to strongly reject all acts of violence, unnecessary provocations, various forms of fraud that distort results, as well as anything that can lead to destabilization and disorder. We encourage all political parties and their supporters to accept the results or outcome of the elections, should the latter be declared free and fair by the competent authority". These are the recommendations of the Bishops of Sierra Leone, expressed in their recent Pastoral Letter in view of the general elections (local, parliamentary and presidential) on March 7, 2018.
In the document sent to Fides titled "Journeying towards peaceful and credible elections" the Bishops call on "political parties and presidential candidates to respect the electoral process, to preserve peace, to uphold the interest of the Sierra Leonean people and to see themselves in this pluralistic election as competitors, not adversaries". They are therefore strongly urging priests, religious and lay faithful to "promote a spirit of unity, reconciliation, tolerance and peace in their sermons, homilies, conferences and pastoral engagements".
In their long Letter, the Bishops express their sincere gratitude to the President, Dr. Ernest Bai Koroma, "for announcing in good time the date for elections, thereby allaying all fears that the elections might be unduly delayed or even postponed. This, in our view, is a major support to the promotion of peace and stability and a boost to our young democracy". They also appreciate the support given by the International Community to their country and its people, especially in moments of dire need. "In a special way we acknowledge the tremendous efforts and sacrifices of Sierra Leoneans both at home and abroad in ensuring that progress is made in our nation that has suffered for far too long", they write, recalling the Ebola epidemic that claimed thousands of valuable lives.
"We can only build better families, communities and our country when Christ leads us with his light and when he becomes the propelling force of our decisions and actions". The "twin tragedies" in our nation, the civil war and the Ebola epidemic, brought Sierra Leoneans together from all walks of life to fight for a common purpose. "Our ethnic, cultural and religious differences were put aside in order to achieve a higher good. Such desirable attitudes that we manifested so clearly at critical moments in our history should be shown again as we move towards the national elections in 2018 that will define the next phase of our Country’s history".
The Bishops therefore launch an appeal to unity and commitment. "As a Church we should not afford to shy away from political participation but our involvement cannot be partisan. In no way can we as a Church champion the cause of any political party. Our cause is a noble one; namely to defend our country and its citizens from political manipulators and to educate all citizens to vote wisely and responsibly". (SL) (Agenzia Fides, 11/07/2017)

AMERICA/BOLIVIA - In the face of an increase in infections, the Bishops reiterate that "it is not wise to hold elections"