ASIA/PHILIPPINES - Appeal of Filipino Bishops: "No more war in Marawi" 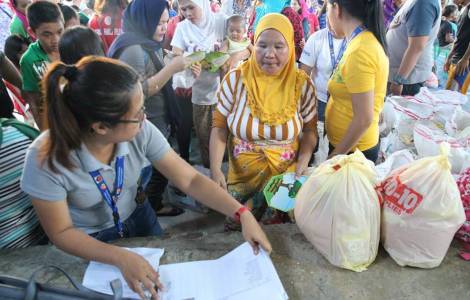 Manila (Agenzia Fides) - "No more war in Marawi! We ask the return to normality and peace as soon as possible in Marawi and in the area. We wonder if the extension of the martial law will lead to this. We believe that the war in Marawi is not a conflict of religion. We heard and read truly amazing stories of how the Muslims protected us and helped Christians avoid an almost certain death. Now Christians are helping thousands of Muslims who have fled from Marawi. These are indisputable signs that there is no religious war", said the appeal from the episcopal Conference of the Philippines, at the end of the plenary assembly held in Manila, and sent to Agenzia Fides.
The Bishops, alongside Mindanao Islamic religious scholars and leaders, deplore the "violent extremist group of Maute in Marawi," who, swearing allegiance to Islam, contradicted the fundamental principles of Islam by abducting and killing innocent people".
By discouraging any instrumental use of religion for violent purposes, the Bishops urge "parents, schools, churches and mosques to ensure that no one can be attracted by terrorists", teaching young people that "our faith is destined for peace" and that "no religion teaches the killing of innocent people, simply because they belong to another faith".
The Bishops’ message recalls that "there is already the basis for peace and understanding. It is part of the fundamental principles of both faiths: love for the only God and love for one’s neighbor's"
"To love our neighbor means to act", the text continues, and the Bishops invite "to share our resources to help the thousands of people fleeing the horrors of Marawi". "Let us pray for the safety of civilians, of those kidnapped by terrorists. Let us try to be vigilant, helping our security forces defeat the threats of terrorism in other areas of Mindanao. Let us help the government to rebuild the city of Marawi so that its citizens can resume their lives".
The message recognizes "the inestimable generosity of donors of different faiths, both local and foreign, who responded promptly to the needs of the refugees of Marawi" and launches an appeal for "further aid". The appeal concludes by entrusting the whole affair and all those who suffer "to Mary the mother of Jesus": "Catholics believe that 100 years ago she appeared to three children in the village of Fatima, which is the name of prophet Muhammad's daughter. To Mary, let us pray for peace and harmony among the peoples of different faiths".
During the assembly, Archbishop Romulo Valles was elected as new president of the Catholic Bishops' Conference of the Philippines: until now vice-president of the Conference, Valles will replace (as of December 1, 2017) Archbishop Socrates Villegas at the head of the community of Lingayen -Dagupan, who finished his second and final mandate. Mgr. Valles, 66, is Archbishop of Davao, while Bishop Pablo Virgilio David, who heads the diocese of Kalooan, was elected vice president. The mandate lasts two years, and is renewable only once.(PA) (Agenzia Fides, 10/7/2017)