ASIA/IRAQ - The two Syriac Patriarchs at the Brussels conference on the future of Christians in Iraq. The Assyrian Church of the East does not attend the conference 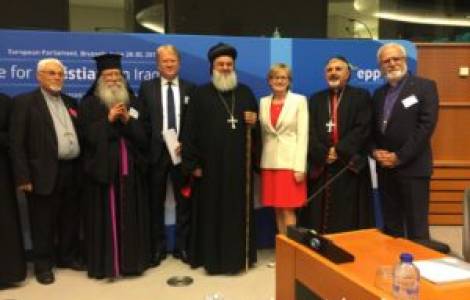 Brussels (Agenzia Fides) - Two Patriarchs of the Eastern Churches, Syriac Orthodox Ignatius Aphrem II and Syriac Catholic Ignatius Youssif III Younan took part in the works of the Conference on A Future for Christians in Iraq in Brussels, at the seat of the European Parliament, on the initiative of European Parliamentarian Lars Adaktusson, representative of the Swedish Democratic Christian Party. The purpose of this conference, Adaktusson had declared in order to launch the initiative "is the return of the population to the Nineveh Plain, and I invite all the Chaldeans, Syriacs and Assyrians to join to ensure that their people can return home" .
Representatives of the Chaldean Church or of the Assyrian Church of the East did not take part in the works of the Conference, which ends today, Friday, June 30. The Chaldean Patriarchate, as Agenzia Fides (see Fides 28/6/2017) had already reported, motivated its decision in a note released last week by recalling, inter alia, that "the future of Christians is linked to the future of the entire Iraqi people", of whom Iraqi Christians are an integral part. Therefore, it is appropriate to reflect on the fate of the Christian presence in Iraq, together with the authorities and other social components, rather than organizing such moments of deepening and mobilization with foreign institutions. If Western countries and institutions want to help Christians in Iraq – says the note - they can do so by supporting the struggle against terrorism and reconstruction of the Country, so as to favor even Christian refugees who want to return to their lands of origin. The Chaldean Patriarchate also calls upon many local Christian political and micro-formations to assume their responsibilities, avoiding to pursue imaginative and unrealistic political hypotheses.
On Thursday, June 29, some media linked to the Assyrian Christian community reported that also the Assyrian Church of the East decided not to send any representatives to the Brussels conference. According to sources cited by Assyria TV, the Assyrian Patriarch judged the initiative hosted by the European Parliament as too unbalanced in favor of independent political designs pursued by Kurdish leaders of the autonomous region of Iraqi Kurdistan, intending to widen its influence over the Nineveh Plain.
In his speech, Orthodox Patriarch Ignatius Aphrem II stated that Christians in the Middle East only want to live in peace together with their fellow countrymen, and has called for international support for the reconstruction and return of refugees to their lands of origin, both in Iraq and in Syria, but made no reference to the need to mobilize international protection forces for the resettlement of Christian communities in their areas of historical roots.
Already in early May, as documented by Agenzia Fides (see Fides 6/5/2017), Chaldean Patriarch Louis Raphael Sako had released a letter suggesting Christians to be calm and not to be dazzled by unrealistic and untimely proposals. On that occasion, the Patriarch seemed to refer in particular to the hypotheses - recently relaunched by Iraqi Christian politicians - to establish protected areas reserved for ethnic religious minorities in northern Iraq - including Christian ones - by providing them with administrative autonomy or even submitting them to guarantees and systems of international protection. (GV) (Agenzia Fides, 30/6/2017)