ASIA/PHILIPPINES - Bishop of Marawi: "Video appeal of Fr. Chito: critical phase, we fear for the lives of the hostages" 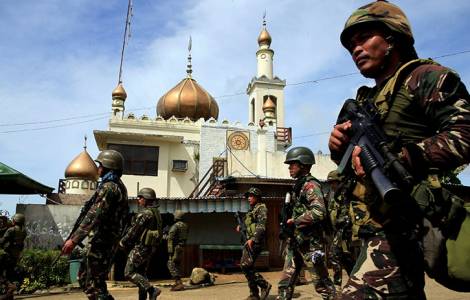 2021-08-05
Filipino migrants are the 'new missionaries': pilgrimage of the Filipino Community for 500 years of evangelization

Marawi (Agenzia Fides) - "Terrorists have sought contact with the military and the institutions. They released a video where Fr. Soganub Teresito, called Fr. Chito, one of the group of about 15 Catholic hostages, launches an appeal to President Duterte asking for the end of the bombings and the attack in Marawi. As foreseeable, militants are now in difficulty, they are with their shoulders against the wall. We are happy to see that Fr. Chito, Vicar of Marawi, is alive, but we are afraid of the fate of the hostages, about 200 civilians in all, now used as human shields": This is what the bishop of Marawi, Edwin de la Pena says to Agenzia Fides, expressing his concern for this delicate phase of the ongoing crisis in Marawi, a town on the island of Mindanao. After a week of fighting, the army has taken control of much of the city: the jihadists of the "Maute" group, affiliated with Isis, remain barricaded in 9 "barangay" (districts) out of 96 in Marawi. Half of the residents (about 100,000 people) have abandoned the city, but a few thousand civilians are trapped in the cross fire. According to official figures, 19 civilians have lost their lives, 13 soldiers, four police officers, and 61 members of the Maute group. Among the latter, six fighters are foreign, indonesians and malaysians.
"Hostages are hidden,who militants want to use to save their lives and flee, in a building in the city", the bishop explains to Fides. "We are really in pain, we do not know what the army will do and how the terrorists will react. We have asked for the help of Muslim leaders in Marawi, our friends, while the whole Catholic population is gathered in prayer throughout the country", he adds.
There is also a humanitarian emergency in the area: more than 40,000 internally displaced persons are in evacuation centers, and as many have found shelter and have been welcomed by relatives or friends in neighboring areas. Catholic communities and civil society associations have been mobilizing for the solidarity and support of refugees. (PA) (Agenzia Fides 30/5/2017)