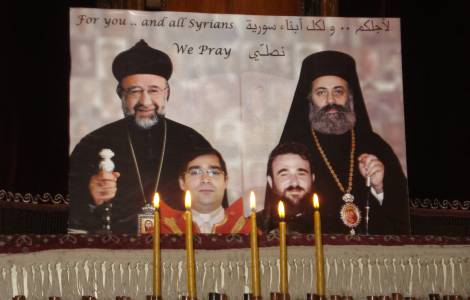 Aleppo (Agenzia Fides) - "Christ is risen and the destiny of our brother-archbishops Boulos and Yohanna is still unclear". Pascha fell this year close to the day of their abduction. "This fourth anniversary is perhaps the most appropriate time for us to raise our voice once more, and to put in the ears of our believers and of all the world the voice of our pain in the Church of Antioch, and the voice of all those who are afflicted in this East". With these words, in a joint message, the two Patriarchs of Antioch, Greek Orthodox Yohanna X and Siro Orthodox Mar Ignatios Aphrem II, remind everyone of the two Metropolitans of Aleppo - Syriac Orthodox Mar Gregorios Yohanna Ibrahim and Greek Orthodox Boulos Yazigi - abducted on April 22, 2013, on the fourth anniversary of their disappearance.
The two metropolitan Bishops of Aleppo were kidnapped in the area between the Syrian metropolis and the border with Turkey. The car on which the two Bishops were traveling was blocked by the kidnappers, and the driver was killed cold-bloodedly, after his escape attempt. We are talking about Fathallah, a Catholic, father of three children.
Since then, no group has claimed the kidnapping. Six months after the kidnapping (see Fides 30/10/2013) General Abbas Ibrahim, head of the Lebanese General Security, revealed that the place where the two abducted Bishops were detained had been identified, and "Indirect contacts" with the kidnappers to obtain their release had begun.
"Christians of the Church of Antioch" reads the joint message sent to Agenzia Fides "always pledge to remember that the path of the resurrection began with the Cross, and was crowned with the light of the empty Tomb. As we imitate Christ, we do not fear death or adversity, but we pray in our weakness, as our Lord Jesus Christ Himself prayed, that the cup of suffering may pass". The message of the two Patriarchs also expresses the will and desire of the Eastern Christians to continue to live in the lands of their millennial rooting: "The power of this world", the two Patriarchs remark, "will not drive us out of our land, because we are the sons of the cross and the resurrection. We have been displaced throughout history, and we are still being displaced up to this day, but each of us is called to remember that the land of Christ will not be emptied of his beloved ones and of those who were named after him two thousand years ago. And if the act of kidnapping the two archbishops and priests aims at defying our Eastern Christian presence, and uprooting it from this land, our answer is clear: even though it has been four years since the two archbishops were kidnapped and this crisis has lasted six years, we are staying here next to the tombs of our fathers, and their hallowed ground. We are deeply rooted in the womb of this East".
In their message, the two Patriarchs, also have the opportunity to express critical considerations of the political and geopolitical lines followed on the Middle East scenarios by Western powers: "We are not in need of sympathy for us or denunciation of others" write Mar Ignatius Aphrem and Yohanna in their message "but we are in need of serious and sincere good will from all parties to foster peace in our land. (...).We do not leave this issue in the care of the civilized world, which has burdened us with its talk about democracies and reforms, while our eastern man is deprived of bread and of all means of livelihood. There is a war, unfortunately, imposed upon us as Syrians, and there are consequences that burden us as Lebanese. And there is a price which we pay as Easterners all over the Middle East stemming from the results of all wars, as though bets are waged on our land... Our summons today is a cry “enough!” in the face of those who finance the terrorist, but feign blindness of his existence, and later rush to fight him or to make a claim to fight him". (GV) (Agenzia Fides, (22/04/2017)