ASIA/JAPAN - Takayama Ukon, "Samurai of Christ" will be beatified on February 7 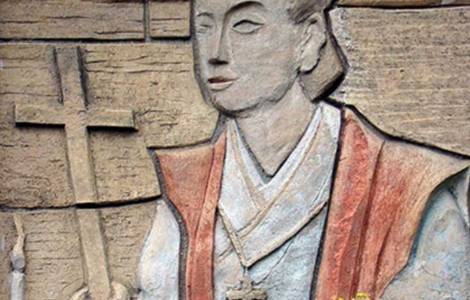 2022-04-05
Appointment of the Bishop of Oita, His Exc. Sulpizio Shinzo Moriyama

2021-12-28
Resignation and appointment of metropolitan archbishop of Nagasaki

2021-07-27
During the Olympic Games marked by the pandemic, the urgency is "to take care of oneself and others"

2021-03-11
On the 10th anniversary of the Fukushima catastrophe: Catholic bishops are calling for the nuclear power plants to be closed

Osaka (Agenzia Fides) - The solemn ceremony of beatification of Justo Takayama Ukon (1552-1615), the "Samurai of Christ", a person dear to the Japanese Church, will be held on February 7 in Osaka. This was announced to Agenzia Fides by Bishop Isao Kikuchi, SVD, at the head of the Diocese of Niigata and President of Caritas Japan, reporting that the date was made official in the exchanges between the Bishops' Conference of Japan and the Holy See. Pope Francis signed the decree of beatification in January 2016 and the Japanese Church has been preparing for the event for a long year, asking for the ceremony to be celebrated on Japanese soil. The Holy See welcomed this instance and Cardinal Angelo Amato, Prefect of the Congregation for the Causes of Saints will preside over the celebration which, as already announced, will be broadcast live on TV in Japan.
Once the diocesan phase of the beatification process ended, the Bishops' Conference, presented in August 2013 the necessary documentation to the Congregation for the Causes of Saints.
Among the many saints in the history of the Church in the land of the Rising Sun (42 saints and 393 blesseds, including European missionaries), all martyrs killed "in odium fidei" during several waves of persecution, the case of Takayama is a special figure: he is in fact, a layman, a politician, a soldier (he was a feudatory and samurai), who was not killed but chose the path of following Christ, poor, obedient and crucified. Ukon gave up a social position of high rank and wealth, in order to remain faithful to Christ and to the Gospel.
Born into a family of landowners, Ukon converts to Christianity at the age of 12, coming into contact with Jesuit missionaries, following the footsteps of his father. The Gospel was introduced in Japan by the Jesuit Francis Xavier in 1549 and had quickly spread. When shogun Toyotomi Hideyoshi took power and prohibits the practice of Christianity, all the great feudal lords accepted the measure, but not Ukon. He lost his properties, his position, his social status, honor and respectability. He will become a wanderer and forced into exile. With three hundred other Japanese Christians he fled to Manila where, just forty days after his arrival, he fell ill and died on February 4, 1615.
The Japanese faithful proclaimed his sanctity already in the seventeenth century, but the isolationist policy of the country prevented the canonical investigators to collect evidence in order to certify his holiness. Only in 1965, his story was resumed by the Japanese Bishops who together promoted the process of beatification.
The film documentary is about his story: "Ukon the Samurai: The Way of the Sword, the way of the cross", produced by "Aurora Vision" under the patronage of the Pontifical Council for Culture, the collaboration of the Embassy of Japan to the Holy See, of the Bishops' Conference of Japan, of the Italian Jesuits, of the "Trentino Film Commission".
The logo chosen for the beatification of the Servant of God is that of Sr. M. Esther Kitazume, the Sister Disciples of the Divine Master. The logo reproduces seven round stars of the emblem of Takayama’s family, with the cross and three rings in the background. The seven stars indicate Ukon’s family but also the seven sacraments and the seven gifts of the Holy Spirit. The cross is a sign of the offering of Ukon’s life. (PA) (Agenzia Fides 20/01/2017)

VATICAN - Pope Francis: May Pauline Jaricot's example arouse in everyone the desire to participate in spreading the Gospel in the world

EUROPE/ITALY - The Armenian Catholic Bishops committed to beginning the process of canonization of Cardinal Agagianian, Prefect of Propaganda Fide from 1960 to 1970