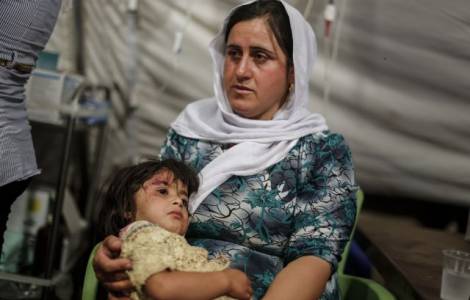 2019-12-04
Chaldean Patriarchate: no decorated Christmas trees, no celebrations, out of respect for the victims

2019-11-26
Chaldean Patriarch Sako praises the pro-demonstrators position of the Ayatollah al Sistani: a "quick solution" to the crisis is needed

2019-11-11
Chaldean Patriarchate: three days of fasting to call for peace to return in Iraq

2019-10-02
"Come and see". The Chaldean Patriarch inaugurates the Extraordinary Missionary Month in Iraq

Erbil (Agenzia Fides) - "The people hospitalized in refugee camps in Erbil, in Dibaga and Kirkuk are concerned: many have friends and relatives forced to stay in Mosul, but many are relieved because they think that one could, with this new advance, try to go home, even if they do not know what they will find. It is feared that homes, businesses, places of worship have been destroyed. There will be a lot of work to be done even after all this": This is what Mustafa Jabbar says in a note sent to Agenzia Fides, coordinator in Erbil of the Federation of Christian Organizations for International Volunteer Service (CIDSE), which brings together 80 NGOs operating in 80 countries of the world.
"The day before yesterday - continues Jabbar - many Christians rejoiced when they heard the news of the release of Qaraqosh, a place where, before the war, a large Christian community" lived. There are mixed feelings: "Next to the satisfaction for this solution, which wants to put an end to an unsustainable stalemate, there is fear for the arrival of so many frightened people who have nothing.
We fear of not being able to respond adequately to the needs of new refugees". Meanwhile from Erbil one can see at a distance oil wells on fire, "while in Kirkuk, closer to area controlled by the Caliphate, the situation is very tense", he says.
For two years CIDSE has been close to the displaced people in the camps of Erbil, in the village of Dibaga and of Ainkawa2 in Kirkuk. The work of volunteers is in particular aimed at children, taking care to set up a nursery for the little ones, so that mothers can work or attend sewing and craft courses. Sport activities for children and young people are organized, along with formation, English and Kurdish courses. Special care is addressed to the most vulnerable, such as women with infants, while special attention, says FOCSIV in a note sent to Fides, is aimed at people with disabilities, with specific treatments and medicines.
The commitment is part of the campaign "Humanity. Being human with human beings" for the Middle East, launched on the occasion of the Pope’s message of peace to Syria, in July 2016, to support the campaign of Caritas Internationalis "Syria: Peace is possible". (PA) (Agenzia Fides 20/10/2016)