ASIA/SYRIA - The Franciscans: concrete steps to be taken to designate a "Safe Zone" in Aleppo under the control of UN peacekeepers 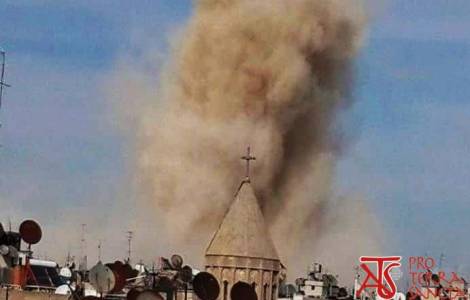 2020-01-15
Journalistic investigation: "the 2 Bishops of Aleppo who disappeared in 2013 martyred". But the incident is still shrouded in mystery

2019-12-19
Bishop of Aleppo: communities weakened by the selfishness of individuals. At Christmas may the light of Christ give us unity

Aleppo (Agenzia Fides) - The international Community must take concrete steps "to designate Aleppo a Safe Zone", to be placed under the direct control "of UN Peacekeeping", using lessons and solutions acquired in previous conflicts, in order to ensure maximum cooperation, and the consequent success of such an initiative". On the day when the Church celebrates the feast of St. Francis of Assisi, the Friars Minor - component of the Franciscan Family which includes the Custody of the Holy Land - have launched an urgent appeal and full of operational implications to call on the international community to stop the carnage taking place in the martyred city and other areas of Syria.
The appeal, co-signed by the Minister General Fr. Michael A. Perry OFM and by the Custos of the Holy Land Fr. Francesco Patton OFM, draws attention to the fact that "other Safe Zones should be created in Syria as part of a comprehensive plan to ensure the safety of all, and finally achieve peace.
These areas - reads the text of the appeal, sent to Agenzia Fides - should be placed under the control of UN peacekeepers, which would operate under a Security Council mandate and with the full cooperation of the various parties involved in the war".
The Superiors of the Friars Minor order and the Custos of the Holy Land appeal to "all forces involved, and to all those who hold political responsibility, to put the good of the defenseless population of Syria, and the city of Aleppo, above and before anything else; to immediately silence your weapons; to put an end to hatred and every kind of violence, so that all may find and walk the path of peace, reconciliation and forgiveness".
In particular – note Fr. Perry and Fr. Patton - the establishment of a security zone around Aleppo "would allow the whole population, worn down by the terrible effects of the conflict, to receive essential humanitarian aid without discrimination, to find safety and security, and to recover some trust and hope in a speedy solution, which would be motivated by peace alone". The Religious Superiors also pledge their prayers and support to "our confrères who courageously continue to live in Syria. Through their closeness and practical service to all those weighed down by the harrowing consequences of the conflict, the friars have shown themselves to be true "good Samaritans".
Currently there are about fifteen Friars Minor in Syria. Among them - confirm local sources to Fides - in addition to the religious dispersed in Damascus, Aleppo and Latakia, there are two friars who continue to carry out their pastoral service in Knayeh, Yacoubieh and Jdeideh, in the villages of the Orontes valley, subject to the domination of jihadist forces, where some hundreds of baptized continue to live, pray and attend Masses celebrated in the three Catholic parishes stripped of the bells, crosses and statues of saints. The two friars who are with them are the only priests and religious Christians left in the lands where jihadist militias dictate laws. (GV) (Agenzia Fides 04/10/2016)

NEWS ANALYSIS/OMNIS TERRA - Franciscans among the nomads: the mission of the Church in Central Asia

ASIA - Franciscans in South Asia: together to serve the "lepers of our time"