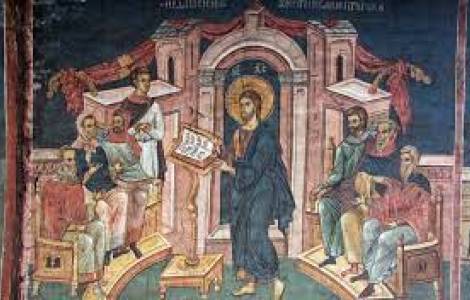 Rome (Agenzia Fides) - The proclamation of the Gospel, that is, of the salvation promised by Jesus, has distinctive traits, almost "genetic connotations" that make it incomparable to any proclamation of political, moral or religious messages and programs. Pope Francis listed and described at least five of them during today's General Audience, Wednesday, January, 25, in the third meeting of the new cycle of catechesis dedicated to passion for evangelization and apostolic zeal.

The first "identifying aspect" that connects those who follow Jesus as "Master of the Proclamation" - Pope Francis began, recalling the Gospel passage of Christ's preaching in the synagogue in Nazareth, read at the beginning of the General Audience - is that of joy. The word Gospel means good news, and "Bearing witness to Jesus, doing something for others in His name, to have received “between the lines” of one’s life, so beautiful a gift that no words suffice to express it". Instead, "when joy is lacking, the Gospel does not come through", and "a sad Christian can talk about beautiful things, but it is all in vain if the news he conveys is not joyful".
The second distinguishing feature that always accompanies the proclamation of the Gospel, continued the Bishop of Rome, is that of deliverance, since Jesus himself "says He was sent release to the captives". That is why those who proclaim the Gospel of Christ "cannot pressure others, no, but relieve them: not impose burdens, but take them away; bearing peace, not bearing guilt". Following Jesus may be marked by pain and sacrifice, but "those who witness to Christ show the beauty of the goal rather than the toil of the journey".

The third aspect that marks the proclamation of the Gospel was referred to by the Pope as the connotation of light: "Jesus", the Successor of Peter recalled, says He came to bring “sight to the blind”." It is striking that throughout the Bible, before Christ, the healing of a blind man never appears, never. It was indeed a promised sign that would come with the Messiah". It is not just about physical sight - the Pontiff added, "but a light that makes one see the life of a new world, and also life in a new way. There is a “coming into the light,” a rebirth that happens only with Jesus". Thus - Pope Francis continued, "Christian life began for us: with Baptism, which in ancient times was called precisely 'enlightenment.'"

The fourth aspect that the Pope associates with the proclamation of the Gospel is that of "healing." Jesus himself announced "that He came “to set at liberty those who are oppressed”," and "oppressed are those in life who feel crushed by something that happens: sickness, labors, burdens on the heart, guilt, mistakes, vices, sins". Those who carry burdens, the Bishop of Rome stressed, "need forgiveness. And those who believe in Jesus have just that to give to others: the power of forgiveness, which frees the soul from all debt".
Moreover - continued Pope Bergoglio, recalling the fifth distinctive aspect that accompanies the proclamation of the Gospel, "with Christ the grace that makes life new always arrives and amazes. The proclamation of Jesus must always bring "the amazement of grace", because "it is not we who do great things, but rather the grace of the Lord who, even through us, accomplishes unexpected things. And these are the surprises of God".
The joyful proclamation of the Gospel - the Pope added in the final part of his reflection, "is addressed in particular "to the poor", who are "the recipients explicitly mentioned, because they are God’s beloved. (GV) (Agenzia Fides, 25/1/2023)

ASIA/SOUTH KOREA - Mission with the deaf, thanks to sign language videos