AFRICA/NIGER - Migrants: the story of those who did not make it and cross the Sahel again to return home 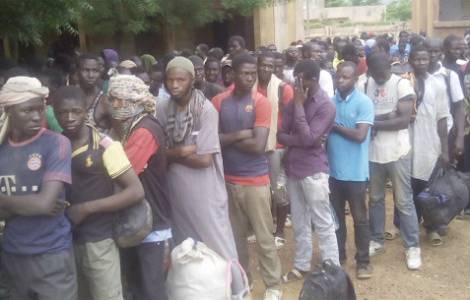 Niamey (Agenzia Fides) - Niger, since the 1990s, has been an important transit area for migration from West and Central Africa to Libya and Algeria and in some cases to Europe. All must face the desert before reaching their destination in North African countries or before facing the Mediterranean to try to reach Europe.
Drama within drama are the expulsions to Niger by border States. For example, from January to May 2022, Algeria sent 14,196 migrants back to Niger.
Father Mauro Armanino, a missionary of the Society of African Missions (SMA) based in Niamey, collected some testimonies of migrants who failed in their attempts to migrate to find a better life and are now in Niger waiting to return home.
"Cécé, who was a tiler in his native Guinea has just returned from Algeria where he could never leave the construction site where he found a precarious job. He says he was paid sometimes and underpaid. It was not worth staying any longer and so he chose to return home to find the same job he had left the year before. A roundtrip in stages tracing political geographies, imagined borders, expulsions, deportations, targeted removals and defeated destinies. The feeling of shame for what has been invested in terms of time, money, energy, dreams and regret is mixed with the bitter relief of being, in spite of everything, still alive. That is no small thing in these times in which the seas, deserts and especially the use of borders are nothing but sophisticated systems of point elimination.
They arrive the next day but have been in town, they say, for a couple of weeks. Both originally from Liberia and left together for Sudan with the secret hope of reaching, via Egypt, Europe. Maurice went to university and taught while Amos established himself as a technician in 'information technology. Except that in Sudan the situation is tragic because of the resistance to the military dictatorship. They find it unnecessary and impossible to stay further in Sudan and here they survive by sleeping where they can as guests of the Great Market in Niamey. They are waiting to make their way back to the country that abandoned them after deluding them with a president and peace without bread and imagination. They smell of travel and adventures never dormant because they go to Liberia with a few more years and a few more deserts to tell those they left at home.
They live, along with James, his four children and mother, under a precarious tent that protects them from nothing. As the new "castaways of development," as economist friend Serge Latouche called them years ago. Survivors of a model of society that not only creates but needs castaways like them. Useful for keeping the ship's crew at bay, so they don't mutiny due to the absence of land on the horizon.
Instead, Alfred swears that he had never visited us, that he had returned from Algeria, that he had first been hunted down there and then expelled. That
he had lost his stolen luggage at the bus station and that was why he had no papers! Nothing about his story, he would confess the next day, corresponded to the truth and yet it was his only story at the time. He and other names are the artists of a world that, perhaps, only sand can return to create with a smile of complicity". (L.M.) (Agenzia Fides, 23/1/2023)