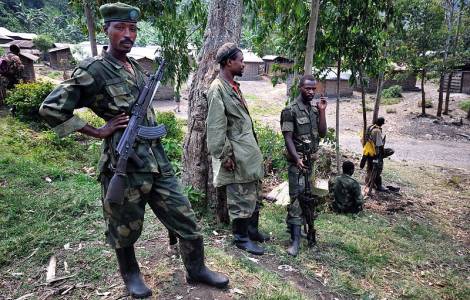 2023-01-16
Islamist attack on church in Kasindi: "Act of revenge for losses suffered"

Kinshasa (Agenzia Fides) - "We are amazed to see the arrival of the EACRF military, considered as a foreign army on Congolese soil against the will of the citizens, and embarrassed by the paradoxical support of the Ugandan army, which in the Territory of Beni conducts joint operations with the Congolese Armed Forces (FARDC), while in the Ruthsuru Territory supports the M23 terrorists who clash with the FARDC”.
These few lines summarize the complexity of the military and security situation in the eastern provinces of the Democratic Republic of the Congo, where at least a hundred guerrilla groups are active, often allied with foreign sponsors.
The declaration above is from the Coordinations of the Civil Society of the Territories of Beni and Lubero, and of the cities of Beni and Butembo (Coordinations de la Société Civil des Territoires de Beni et de Lubero, et des villes de Beni et de Butembo), in North Kivu. This province, together with that of Ituri and that of South Kivu, has been living in conditions of great insecurity for 30 years due to the presence of the aforementioned armed groups. The UN peacekeeping mission (MONUSCO) is deployed in the east of the DRC, but it has faced strong criticism from the local population, because it is unable to guarantee the safety of the inhabitants. MONUSCO's mandate has been renewed until December 20, 2023, when the Congolese general elections will be held.
The soldiers of the East African Community Regional Force (EACRF) have recently joined the UN Blue Helmets, in charge in particular with overseeing the withdrawal of the main guerrilla movement active in North Kivu, the M23 (See Fides, 10/1/2023). A withdrawal, which according to the civil society organizations of North-Kivu and South-Kivu, is only a facade, because the M23 troops still occupy various settlements in the Territories of Rutshuru and in those of Nyiragongo (including the Catholic parish in Chegera village) in North Kivu. According to Congolese civil society organizations, the newly arrived EACFR troops together with the Congolese Armed Forces (FARDC) are playing a backhanded game in organizing withdrawal ceremonies for M23 fighters.
Especially since this movement, officially dissolved in 2013 and reconstructed in 2021, would receive support from the armies of Rwanda and Uganda. The latter country has a military presence in North Kivu in support of the Congolese army to fight the extremists of the ADF (Allied Democratic Forces), a group of Ugandan origin, accused of the attack on Sunday 15 January in the Church of Christ in Congo ( Eglise du Christ au Congo ECC) in Kasindi (see Fides, 16/1/2023). In turn, Rwanda justifies its interference in eastern DRC to defend itself from the heir groups of the old regime responsible for the 1994 genocide. In short, the presence of armed groups of various origins and nature is often a pretext for foreign interference in a rich territory of enormous forest and mineral resources. It is the local populations who are paying the price, on which ethnic strife also weighs, suitably fueled to keep them divided and in turmoil. (L.M.) (Agenzia Fides, 17/1/2023)