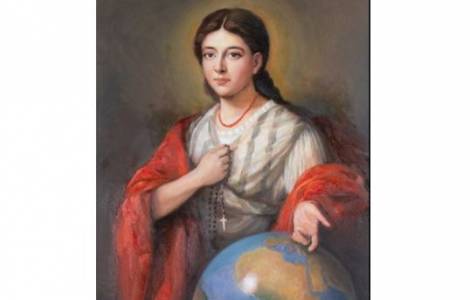 Vatican City (Agenzia Fides) - "Today, January 9, 2023, we celebrate for the first time the feast of the foundress of the Pontifical Society for the Propagation of the Faith and inspiration of all the Pontifical Mission Societies, Blessed Pauline-Marie Jaricot, beatified in May 2022.
Pauline dedicated her life to announcing the Gospel to the ends of the earth. Her secret was her deep union with Christ Jesus. With her, we renew our call to holiness," said Father Tadeusz J. Nowak, OMI, Secretary General of the Pontifical Society for the Propagation of the Faith, during the mass celebrated this morning in the chapel named after John Henry Newman, in the Palace of Propaganda of the Faith, seat of the Dicastery for Evangelization and of the International Secretariats of the Pontifical Mission Societies.
Father Nowak recalled with joy that "for the first time in history, this memory will be celebrated in the universal Church, and in particular in the Archdiocese of Lyon, where our foundress is buried". Pauline, he continued, "is an example of total dedication to the mission of the Church, confirmed by a life of holiness and joyful abandonment to the Lord". "Let us not hesitate to imitate the quality of her life and to pray for her intercession, especially when we are faced with formidable challenges in our service to the missionary Church", he hoped, expressing his gratitude "for the privilege of working and serving by continuing the work and the spirit of the Blessed" who lives today in the Pontifical Mission Societies.
Pauline-Marie Jaricot (1799 -1862) was a woman of profound faith and charity. Coming from a wealthy family, she chose to renounce the wealth in which she was born to live, in simplicity, a radical adherence to the Gospel.
Having heard and known the testimonies of the missionaries, she was struck by them, and the Holy Spirit suggested in her heart a way of accompanying them: in 1822, Pauline gave life to the Association for the Propagation of the Faith, which involved all baptized in the support of missionaries, then supported only by her own congregation, relatives and friends. She thus cultivated a community dimension, founding small circles that supported the missionaries with prayer and financial contributions.
One hundred years later, in 1922, Pope Pius XI raised the society to "pontifical" status, welcoming and recognizing this form of popular participation by the Christian community in the mission. The initiative, born from a consecrated laywoman in a given context, became a pastoral proposal valid for the whole universal Church. In 2022, the Pontifical Mission Societies celebrated the beatification of Jaricot (on May 22, 2022 in Lyon) and the anniversaries of the foundation of the Pontifical Society for the Propagation of the Faith, and its pontifical recognition. (PA) (Agenzia Fides, 9/1/2023)