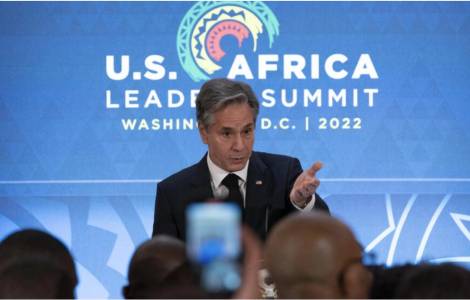 2023-01-04
The memory of Pope Benedict XVI of some African Bishops: "A great theologian of profound humanity"

2022-12-28
'You came to this country with nothing and you will leave with nothing': the story of an exiled family far from home

Rome (Agenzia Fides) - US Treasury Secretary Janet Yellen will visit Senegal, Zambia and South Africa from January 17 to 28, according to a statement released yesterday, December 16, immediately after the conclusion of the US-Africa Summit held in Washington from December 13 to 15.
"Yellen will highlight the Biden administration's efforts to deepen economic ties between the United States and Africa and discuss ways the United States is working with African leaders to build a stronger, more resilient economy that benefits its citizens", says the statement, highlighting the change in US policy towards the African continent from an approach that emphasized anti-terrorist cooperation (which is still maintained) to one based on economics.
The US-Africa Leaders Summit was attended by 49 African Heads of State and Government, in which US President Joe Biden promised that the African Union will soon have its own representation at the G20 summits because, as has said, Africa "must be able to make its voice heard in all circles that matter". Previously, Biden had not ruled out a possible African seat on the UN Security Council.
The last Summit between the USA and African countries dates back to 2014, at the time of the Obama Administration, which had launched a series of initiatives such as Power Africa, to promote energy generation and distribution networks in various African states, or the Young African Leaders Initiative, aimed at fostering the training of a new generation of African leaders, linked to "Western values" (an initiative now taken up by the Obama Foundation Leaders Africa). The formation of personal ties between potential young leaders of foreign countries and the United States is one of the most enduring "soft power" strategies adopted by Washington since the dawn of the Cold War. Subsequently, it was complemented with actions to support civil society agents, including training sessions on non-violent forms of struggle.
By reconfirming these projects and extending the African Growth Opportunities Act (launched in 2000 to facilitate African exports to the United States) until 2025, the summit
saw the conclusion of $55 billion worth of public cooperation agreements in three years and 15,000 million in private investments in various sectors ranging from space to health, through agriculture, transport, new technologies or food safety. Apart from the Summit, among others, two African countries, Rwanda and Nigeria, have adhered to the Artemis Accords, intended for the exploration and exploitation of lunar resources and other celestial bodies.
Washington's renewed attention to Africa goes hand in hand with that of the other powers towards the continent, which is experiencing population growth and is rich in mineral resources, such as cobalt, essential for the energy transition. The vote of the more than 50 African states is also important in UN bodies. They frequently host similar summits in China (the continent's largest trading partner), Russia, France, the European Union, Japan, Turkey and South Korea. (L.M.) (Agenzia Fides, 17/12/2022)