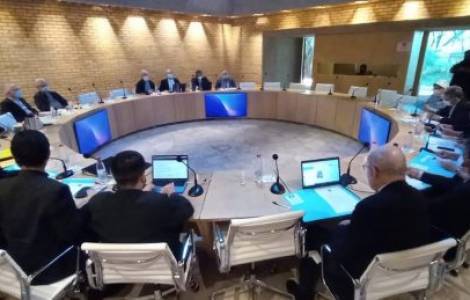 Asuncion (Agenzia Fides) - On April 30, 2023, general elections will be held in Paraguay to elect the President of the Republic, who is also Head of Government. The centre-left opposition, which has formed the "Concertación for a new Paraguay", an inter-party alliance, will challenge the conservative executive, led by the "Colorado Party". Candidates for the presidency will be chosen through primaries (Internal Elections) on December 18, which are not mandatory but are regulated at the state level. The Colorado Party primaries are only open to registered members, while the Concertación primaries are governed by the principle of universal suffrage.
The Permanent Council of the Paraguayan Episcopal Conference invites "Christians and Paraguayans of good will to fulfill their right and obligation as citizens to vote." In a brief statement released yesterday, the bishops recall the Code of Electoral Justice, according to which voting is universal, free, direct, secret and personal, and exhort: "The exercise of the vote must be done without pressure of any kind. Those who buy votes cannot be trusted, much less those who sell their votes". So the bishops reiterate: "if we want a serious government and state, our vote must be serious." For this reason, the Church of Paraguay appeals to the conscience of each citizen so that the vote is "a valuable instrument to elect people whose life testimony proves that from the government they will work for the common good and at the service of a dignified and full life for our town".
During the novena in preparation for December 8, the solemnity of the Immaculate Conception and a feast at the National Shrine dedicated to the Virgin of Caacupé, the bishops took turns celebrating mass each day. The Archbishop of Asunción, Adalberto Martínez Flores, the first Cardinal in the history of Paraguay, in his December 1 homily criticized the widespread corruption in politics, calling on citizens to vote with knowledge of cause. "Catholics – he said – are the majority among the voters. They must participate, not stay at home watching from the balcony and passively see how corruption and impunity are destroying the nation, depriving our people of a dignified life". He urged voters to know and evaluate the testimony of public and private life of the candidates, not only their speeches and proposals. “Paraguay urgently needs signs of hope, more growing signs of hope and development – the Cardinal continued -. The Catholic Church cannot disappoint the great trust that citizens place in it. The Social Doctrine of the Church is a treasure that we make available to those who have responsibilities and leadership in the country, and to all people of good will, as a contribution to the moral healing of the nation, to work for the good common and as a service to the integral development of our people".
The "critical state" of the national education system, the situation of the land and territories of the indigenous peoples, as well as the upcoming general elections in April, where it is necessary to elect honest people capable of the task they assume, were the main issues of national life addressed by the Bishops of Paraguay in the last Plenary Assembly of the Episcopal Conference (see Fides, 5/11/2022). In the final message, the Bishops draw attention "to the importance and urgency of an accessible and quality education", considering "the undeniable critical state of the national education system". In addition, another urgent issue that must be addressed is the accumulation of large tracts of land in the hands of a few and the continuous evictions, even with violence, of indigenous communities, who are entitled to it according to the laws.
Facing the 2023 general elections, the bishops call for "a culture of the common good, a free and responsible exercise of the right and duty to vote, a healthy and constructive debate on the future of our country." The synodal process highlighted the importance of social dialogue, of looking towards goals of justice and peace, of walking together, leaving no one behind. The Catholic laity, especially in this Year dedicated to them by the Church of Paraguay - recall the Bishops - are called to be "ferment of change and transformation in the Church and in society". (SL) (Agenzia Fides, 14/12/2022)