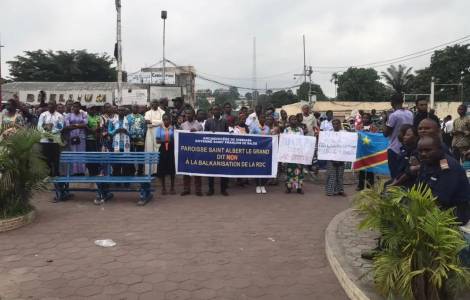 Kinshasa (Agenzia Fides) - "Our march has no political meaning, it aims to show the world that we are one people, united for the national cause, united for the sovereignty of our country and for the dignity of our people" , declared Cardinal Fridolin Ambongo, Archbishop of Kinshasa, in his message addressed to the participants of the march which took place yesterday, Sunday, December 4, in the dioceses of the Democratic Republic of Congo. The march was promoted by Congolese Catholic bishops to protest against violence in the east of the country (see Fides 11/11/2022 and 12/3/2022).
Rosary in hand, religious hymns, crucifixes and banners, demonstrators of all ages took part in about fifteen marches in the capital Kinshasa and walked the streets of many other cities. However, the planned march in Goma, capital of North Kivu, was canceled to avoid any "possible infiltration".
"No to the balkanization of the DRC", "No to the hypocrisy of the international community..." The same slogans were chanted in the many processions which left Congolese parishes after mass.
During the demonstration, whose objective was in particular to denounce the violence of the terrorist movement of March 23 (M23) which occupies several localities in North Kivu, the demonstrators criticized the silence of the international community which, according to them, borders on complicity with occupying forces that violate the sovereignty and territorial integrity of the DRC.
According to these protesters, the "predatory natural resource" states of the DRC are the United States, Great Britain, France and Belgium. They also denounced the behavior of the UN, the EU and the EAC (Community of East African States) which they say are not playing fair.
"The international community is showing a hypocritical and complacent attitude that borders on complicity," reads a statement issued by participants in the Kinshasa demonstration, in which they demand a series of measures from the Congolese authorities.
First, an in-depth restructuring of the security services. Secondly, the Congolese authorities were called upon to intensify the process of the withdrawal of the United Nations Organization Stabilization Mission in the DRC (MONUSCO) from Congolese territory and the withdrawal of the DRC from the EAC and the Organization International of La Francophonie. (L.M.) (Agenzia Fides, 5/12/2022)