AFRICA/ETHIOPIA - In Tigray, disarmament is ready, but subject to the withdrawal of Eritrean and Amhara forces from the region 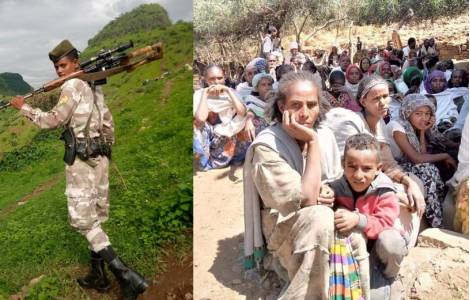 Addis Ababa (Agenzia Fides) - While efforts continue in Ethiopia to try to normalize the situation in Tigray after the signing of the peace accords on November 3, there are difficulties for a real disarmament of the parties in conflict.
The 'most problematic factor in the process of implementing the peace agreement' is the presence of Eritrean forces in Tigray. This is what the Tigray authorities told the African Union delegation.
Despite the humanitarian and political commitment, a likely threat to peace, according to Tigrinya testimonies, is the continued attacks by Eritrean troops against the civilian population.
According to the Tigray government's emergency coordination center, between November 17 and 23, 2022, Eritrean forces killed 111 people.
On November 24, during a visit to the town of Macalle, in Tigray, the high representative of the African Union in the Horn of Africa and chief negotiator for peace between the Ethiopian government and the authorities of Tigray , Olusegun Obasanjo, met with senior regional state officials and representatives of religious institutions to discuss progress in the implementation of the peace agreement, along with Phumuzile Mlalmbo, one of the three African mediators during the talks of peace in South Africa.
"No country should accept the presence of a foreign county on its territory", said Olusegun Obasanjo regarding the presence of foreign troops in Ethiopia.
Tigrinyan forces, according to spokesman Tadesse Wereda, said their fighters had been briefed on the disarmament protocol but the delivery of heavy weapons is linked to the withdrawal of Eritrean and Amhara forces in the Tigray region.
According to analyst William Davison, citing sources inside Tigray, Ethiopian Federal Troops (ENDF) and Ethiopian police were redeployed to the town of Adigrat after Tigray forces withdrew. The area is one of the hardest hit by Eritrean forces and is the seat of the eparchy where Eparch Tesfaselassie Medhin lives.
An important step took place on Wednesday, November 30 in Shire, in northwestern Tigray: the joint technical planning committee, which is supposed to define the detailed plan for the disarmament of Tigray fighters, took office at a meeting between the military leadership of the federal army and the Tigrayan forces. The committee, established on November 12 in Nairobi, is expected to finalize its tasks in the coming days with a detailed plan to address disarmament and other related issues. Planning was delayed due to technical factors.
The distribution of food by the World Food Programme, as well as fuel and medical aid, by land and air, also continues. Access restrictions are still reported in the central and northern regions of Tigray, where an estimated 170,000 people are in need of humanitarian assistance. The situation is also very critical in the Amhara and Afar regions, where respectively 7 million and 1.2 million people need food aid. (GF) (Agenzia Fides, 3/12/2022)