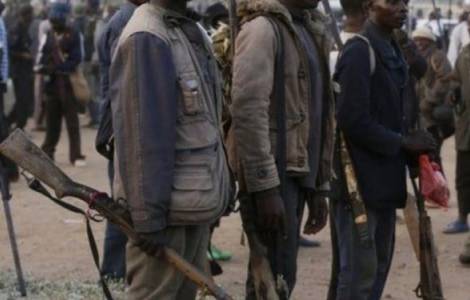 2022-11-29
Father Ochang and members of St. Jude's Society kidnapped on November 24 have been released

2022-11-25
New kidnapping of a priest together with a group of faithful; released another priest kidnapped last week

Abuja (Agenzia Fides) - The kidnapping of a Catholic priest in the state of Anambra, in Anambra State, south-eastern Nigeria, ended in 24 hours. Father Cyril Okafor was abducted on November 15, 2022 from the Holy Ghost Adoration Center, Igboukwu.
According to the Umueri Community General Chairman, Johnny Chukwudi Metchie, "After abducting him, the kidnappers took him to Enugu and then to Nteje, where they hoped to keep him in a hotel room, but the hotel was full. The kidnappers then moved him to Otuocha, and kept him in an abandoned building, waiting for his family to pay a ransom." But a team from the Umueri vigilante group managed to intercept one of the priest's kidnappers, who then led the vigilantes to where he was being held and to his release.
This incident demonstrates the important role of the Vigilante Group of Umueri, a group that partners with the Nigerian Federal Police to fight crime in Anambra State. However, vigilante operations are not completely independent of the police and other security agencies. For example, when people were abducted in Anambra State in 2019, the
commander of operations, Special Anti-Robbery Squad (OC SARS) of Anambra State specifically requested the assistance of vigilantes to find the kidnapped people.
The Vigilante Group was recently officially recognized by the Anambra State government. A bill includes provisions in the budget for this group, thus making the organization a security group recognized and paid for by the government. Similar groups also exist in other states of the Nigerian Federation, as the federal police alone cannot guarantee the security of the internal national territory (over 924,000 km2) populated by more than 200 ethnic groups with customs and different traditions.
Vigilant units not only provide security through patrols, they also act as guardians during social events such as funerals, weddings, traditional and religious ceremonies, etc.
However, the phenomenon of Vigilante groups also has drawbacks, such as the corruption of its members, the excessive use of violence, and even extrajudicial executions. The Nigerian bishops have warned that the use of vigilante groups, combined with separatist sentiments, can generate centrifugal forces and divide the country (see Fides, 24/2/2021). (L.M.) (Agenzia Fides, 19/11/2022)

AFRICA/NIGERIA - Kaduna: Kidnapping of a Catholic priest and 9 other people in a village attacked by bandits

AFRICA/CAMEROON - Video of the hostages captured in the church of Nchang: "Do everything to free us as soon as possible"

AFRICA/MALI - The Episcopal Conference: "We have no news of the fate of Fr. Hans-Joachim Lohre"

AFRICA/MALI - A White Father of German nationality has disappeared, there are fears of a kidnapping