AMERICA/BOLIVIA - The Bishops call for "the end of hostilities among brothers, respect and guarantees for those who do not agree with the rulers" 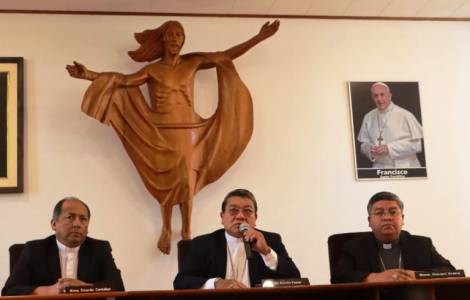 Cochabamba (Agenzia Fides) - "We ask, in the name of God, to put an end to hostilities among Bolivian brothers, and we urge those who are called to do so, to open authentic spaces for dialogue, tolerance and reconciliation, which revive fraternity among all. We also ask for respect and guarantees for those who, in justice and in law, disagree with the vision of those who govern us, so that they are not victims of persecution and an improper use of justice. We urge the police forces not to be factors of confrontation and violence, but to act according to their mission, protecting the population as a whole". This is the appeal that the Bishops of Bolivia launch in the message published at the end of the 60th Assembly of the Episcopal Conference (see Fides, 14/11/2022), addressing the Bolivian people, "especially those who suffer, are afflicted and have the desire for a dignified, just, peaceful, supportive life and opportunities for all".
In the message, significantly entitled "Yes to the culture of Encounter!", the Bishops recall that the Gospel offers us "the path of fraternity, which is realized in the search for the good of all and in contributing to the construction of our common home", and they recall the concerns and sufferings of the people they walk with. "The people suffer when their authorities delay, postpone and cause uncertainty on decisive issues" they affirm, underlining that "those who govern us are called to guarantee the rights of every citizen with an attitude of authentic listening for a peaceful coexistence, dialogue, responsibility and the pursuit of the common good".
Citing Pope Francis' invitation, in the encyclical "Fratelli Tutti", to the "culture of encounter" and not to isolation, the Bishops say they are concerned about the situation in the country, "due to disagreement and confrontation, exacerbated by excessive violence motivated by oppositional political ends", which in response causes an increase in violence itself and social disintegration. As Pastors, they therefore call to promote the "culture of encounter" which leads to the realization of the country's legitimate expectations in a climate of peaceful and serene coexistence, and launch an appeal for the disarmament of violent positions. "The good of all must prevail and only by working together, overcoming difficulties and opposing positions, will we be able to glimpse a future for the country".
In the concluding part of the message, the Bishops exhort hope, "which sets us on the road and gives us the strength to go forward, even when the obstacles seem insurmountable" and ask the Christian communities to "intensify prayer and commitment for the promotion of the culture of fraternity and respect for human rights". "May the already approaching Christmas of our Savior find us building and working for new and renewed paths of listening, respect and tolerance; Thus we can learn to live in forgiveness and love, so that our ability to become people of peace will increase".
Bolivia has been on an indefinite strike since 22 October to demand that the government carry out the population census in 2023 instead of 2024. Starting from the Santa Cruz region, the country's economic engine, the strike has spread to other regions, causing even violent clashes, between those in favor and against, which have taken on a political connotation, between supporters and opponents of the Government of Luis Arce (see Fides, 28/10/2022; 4/11/2022; 14/11/2022).
The Office of the Ombudsman (Defensoria del pueblo) communicated that it "recognized that all social demonstrations are legitimate", but rejected "the intransigence of the protagonists of the conflict" inviting "not to commit acts of violence in the exercise of their right to protest". He also urged the Bolivian police to carry out their work "within the framework of the law", in proportion to the needs, and to "protect the integrity" of the men in uniform, but above all of the citizens. (SL) (Agenzia Fides, 18/11/2022)