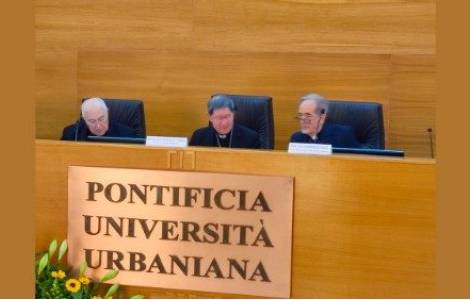 Vatican City (Agenzia Fides) - Who will tell the story of Jesus? What words and what paths to find to tell it in the new contemporary world marked by artificial and digital intelligence, polarizing extremism, religious indifference, forced immigration, climatic disasters? The question, disturbing but relevant, resounded in the Aula Magna of the Pontifical Urbaniana University on the afternoon of Wednesday, November 16. It was posed by Cardinal Luis Antonio Gokim Tagle, at the end of his speech at the inaugural session of the International Conference Euntes in mundum universum, organized 400 years after the creation of the Sacred Congregation of Propaganda Fide, the Dicastery for Missions established by Pope Gregory XV in 1622. The Cardinal's questions remained unanswered in the auditorium, which was packed to capacity with speakers, conference attendees and students from the Pontifical Universities.

In his singular speech, which was the preamble to an intense program, rich in reports and speeches of a high academic level, Cardinal Tagle traced the centuries-old history of Propaganda Fide up to the mission of "telling the story of Jesus to the world", source and raison d'être of this Roman institution, which today has merged with its history and its competences in the Dicastery for Evangelization. "We are not celebrating a story that is ending, but a story that continues", said Father Leonardo Sileo, Magnificent Rector of the Urbaniana, in his initial greeting to the participants.

"Confronting the long history of Propaganda Fide" - Cardinal Tagle emphasized - will lead conference attendees to "hear a lot of stories: some already known to us, others quite new". The entire contribution of the Filipino Cardinal aimed to testify that it is precisely around the "telling of stories" and its effects that the intimate fabric of all individual and collective history is woven, including the history of Salvation.

"History", said Cardinal Tagle in particular, "is made up of stories, and the Gospel is also full of stories". Human life "is unimaginable without stories", life itself has "a narrative structure". And that also applies to the life of an institution like Propaganda Fide. Then, any story is real and persuasive on its own when it is based on experience, when it tells the "first-hand" experience of the narrator, who was present when the events happened and who was the "eyewitness". Thus, we tell "our best stories when they are about our experience". The events of Propaganda Fide and the mission stories also have the power to be told by eyewitnesses who have left valuable traces in the various archives of the Congregation, which will be digitized - the Cardinal announced - to be shared and made available to academics and researchers.

"The stories told" - Cardinal Tagle continued in his reflection, "reveal personal identity as well as the people and events that shaped that identity. Stories reveal who we are, the sense of our lives and where we are going. "As I tell my little stories, my fundamental life story is revealed not only to the listener but also to me. I also realize that the story is not simply about me. It is also always about other people, my family and friends, society, culture, the economy, or what we call ‘the times’ (…) My story is not developed in a vacuum. I am what I am because I am immersed in other people’s stories and the stories of my time".

"The stories told", the Filipino Cardinal emphasized, "are dynamic, transformative, open to re-telling". In them, memory becomes a vital factor for the present. By remembering our stories, we also realize "that the past is not static". When we tell our stories, "we see how much we have changed and how much more we need to change".

"Stories", continues Cardinal Tagle, disclose the values, moral norms and priorities of a person or community, "they are the ground for understanding spiritual, doctrinal, and ethical symbols. Stories "shape community". Common experience and memories "bind unique individuals into a cohesive body". And when they are told, "they can transform the listener", the one who listens to the stories of others can "awaken memories of similar experiences in a listener". Despite that, the stories heard can "create wonder and awaken from slumber". In other situations, stories can also be suppressed, as victims of trauma do to avoid prolonging and renewing their own suffering, or as dictators do when they prevent the dissemination of news and stories of corruption, oppression and violence.

At the end of his speech, Cardinal Tagle invited us to apply the points he raised in his remarks on the relevance of "storytelling" also to the life "of a community or an institution like Propaganda Fide". And he concluded by asking questions that he himself described as “provocative”: "When talking about the history of Propaganda Fide, whose stories are told? The stories of Popes? of Prefects? of local communities? of the poor? The story of Jesus? Will the history of Propaganda Fide embolden us to enter the contemporary worlds of artificial and digital intelligence, extremism, polarization, religious indifference, forced migration, climatic disasters, to name a few? How will the story of Jesus be told in these worlds? Who will tell the story of Jesus? Euntes in mundum universum", concluded Cardinal Tagle, repeating the words of the Risen Jesus to the Apostles ("Go into all the world") in the Latin version which also serves as the title of the Conference on the 400th anniversary of Propaganda Fide.

VATICAN - Studying the past to outline the future of the mission: the Conference for the fourth centenary of Propaganda Fide

VATICAN - Thirty years since "Redemptoris Missio" and "Dialogue and Proclamation": a Congress at the Urbaniana University