VATICAN - Proclaiming Jesus in all languages. The "missionary prophecy" of the Polyglot Typography of Propaganda Fide

Wednesday, 16 November 2022 congregation for the evangelization of peoples 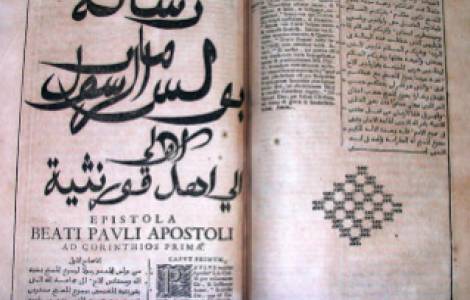 by Stefano Lodigiani
Vatican City (Agenzia Fides) - The celebrations for the 400th anniversary of the founding of the Congregation of Propaganda Fide - which took place in 1622 - offer the opportunity to rediscover the innovative and in many ways very current intuitions, which were at the origin of this institution. A prophetic value also attested by the first "operational instruments" with which the newborn Congregation wanted to equip itself, starting with the deserving and glorious Polyglot Typography of Propaganda Fide.
Retracing the history of the "Polyglot Propaganda" means coming across figures and events which also testify, in a surprising way, to the readiness and flexibility with which the "fides romana" knows and can use all the instruments to announce to the world the salvation promised by Christ.
In the acts of the General Congregation of Propaganda Fide held on June 3, 1626, we find the decision to create the "Polyglot Printing Office of Propaganda Fide". In 1627, Pope Urban VIII appointed Cardinal Guido Bentivoglio, first prefect of the Polyglot Typography of Propaganda Fide, as head of the Prefecture of the Press. The other Cardinals who succeeded him in this function always belonged to the Congregation of Propaganda Fide. According to the chronicles, the Typography had its first headquarters in the premises donated by canon Achille Veneri at the Salita del Grillo, between the Quirinal hill and the Imperial Forums.

The Cardinal destined to take charge of the new institution was from Ferrara, where he was born on October 4, 1577, and had studied at the University of Padua, where he obtained a degree in utroque iure. Since his early studies, Bentivoglio had shown a particular predilection for history, so much so that the works he composed in the following years represent, according to scholars, an essential stage in the development of modern historical methodology. Thanks to his friendship with Cardinal Pietro Aldobrandini, nephew of Pope Clement VIII, Bentivoglio was appointed the pope's secret chamberlain and, after completing his studies in Padua, moved to Rome.

His moral and intellectual, historical and political formation in the Roman period was influenced by three personalities with whom he established close ties of friendship and study: Cardinal Silvio Antoniano, academic and essayist; Cardinal Cesare Baronio, of the Congregation of the Oratory, author of the first volumes of the ecclesiastical Annales ecclesiastici (history of Christianity from its origins to 1198) and of the revision of the Roman Martyrology; and Jesuit Cardinal Roberto Bellarmino, theologian and fine writer.

Guido Bentivoglio, presbyter and Archbishop, was appointed Cardinal by Pope Paul V on January 11, 1621. Apostolic Nuncio in Flanders, then at the Court of France, he returned to Rome and was in charge of the Inquisition. He died in Rome on September 7, 1644. He left several works, some of which have been translated into other languages, for which he is recognized for his skill and his passion for diplomacy and politics, as well as for the history, proving his ease in writing even about complex events, making them understandable for everyone.

This Cardinal with a refined culture and, at the same time, a capacity for synthesis and dissemination, was therefore entrusted with the task of directing the newly formed Polyglot Typography of Propaganda Fide, which came into being shortly after the birth of the Congregation of Propaganda Fide (founded by Pope Gregory XVI on January 6, 1622 and officially erected on June 22 of the same year) and even before the establishment of the Urban College for the formation of missionary priests, erected by Pope Urban VIII on August 1, 1627 .

The birth of the Polyglot Typography is attributed by historians to the impetus of another man of culture, Monsignor Francesco Ingoli (1578-1649), who, from 1622 to his death, was the precious first secretary of the Congregation of the "Propaganda Fide". Ingoli is the author of the "Report of the Four Parts of the World", written around 1630: a real geo-missionary report established on the basis of the reports of missionaries in each part of the world known at the time. The manuscript, thought to be lost and only rediscovered in 1999, consists of five parts consisting of five letters addressed to Father Valeriano Magni, then provincial of the Capuchins in Bohemia. Each letter is in fact a dense report and the work as a whole provides a complete picture of the missionary activity of the Catholic Church in the middle of the 17th century.
"Europe", "Asia", "Africa" and "America" are the four parts of the world to which Ingoli devotes his work. A fifth letter is devoted to "things done in Rome for the Propagation of the Faith", with an interior description of the first years of the life of the Congregation.

Dwelling, albeit with brief hints, on the cultural formation and writing activity of the two personalities who were most involved in the founding of the Polyglot Typography, can help to better understand the spirit and purpose for which it was born. Ingoli, a man of culture and recognized linguistic skills, was strongly convinced that the newborn Dicastery should include, among its main tasks, the printing of books in the different languages that would be useful for missionary work. The missionaries indeed needed texts of Sacred Scripture and Catholic Doctrine in the language of the peoples to whom they were sent. The financial commitment to this end was certainly not negligible and over the years has given rise to some criticism, which Ingoli has always rejected with firmness and apostolic enthusiasm. It should be noted that very quickly, the published texts are not only reserved for the missionaries scattered in the world, but were disseminated in Europe by booksellers, for religious and even economic reasons, in order to support the enormous expenses.

Particular attention was paid to the translation work, at a time also marked by significant efforts to counter the doctrines and teachings disseminated by Protestant and Orthodox texts. In 1643, the Typography was transferred to premises near the headquarters of the Urban College, in Piazza di Spagna, thus making possible a closer and more fruitful collaboration, in management and especially in the linguistic field, between the Congregation, the College and the typography.

The Polyglot Typography of Propaganda Fide began to work thanks to the characters that the Emperor Ferdinand II gave to Propaganda Fide: "the Illyrian characters of St. Jerome and St. Cyril", i.e. respectively Western Glagolitic (the most ancient Slavic alphabet) and Cyrillic. With these characters, which arrived from Austria, and with other characters, Greek and Latin, found in Rome, Giovanni Bandini and Francesco Paolini, proofreaders of the Stamperia Camerale, began to work.

The first volume printed was probably a Greek version of the "Guía de pecadores" by the Dominican Luigi da Granada, written in 1588, which was followed by works on grammar, law, controversies and spirituality, all aimed at serving the missionaries in the East. The first catalogue, published in 1639, contained the titles printed as early as 1628. The second catalog of the Propaganda Printing House, published in 1667, is a splendid example of its missionary vigor and technical expertise. Conceived by the Greek Leo Allatius, the catalog presented works at the service of the missionaries, such as those of the Maronite Abraham Ecchellensis (1600-1664), Allatius himself, Cardinal Bona, of the Discalced Carmelite Missionaries, compiled in various Western and Eastern languages. Among the many important works published by the Printing Office is the first complete edition of the Bible in Arabic, published in 1671, whose xylographic matrix used to print the incipit of the First Letter to the Corinthians is preserved in the Historical Archives of Propaganda Faith.

By the time the fifth catalog was published in 1761, typographic technique had reached a very high standard and the Propaganda Printing House seemed well established in the service of missionaries. The young Giambattista Bodoni (1740-1813) arrived in Rome in 1758 and exercised his typographical art in the Propaganda printing press until 1767, when he moved to the Ducal Court of Parma, soon becoming the "typographer of kings" throughout Europe, without however breaking his ties with the printing press where he had begun his profession by working there as an apprentice.
During the French Revolution,
the Printing House also suffered looting but managed to recover and continue its missionary work throughout the 19th century. In 1909, his Acta Sanctae Sedis paved the way for the Acta Apostolicae Sedis, and in the same year the Propaganda Fide printing house became part of the current Vatican Polyglot Printing House.
(Consulted sources: Historical Archives of Propaganda Fide, Fides News Agency, Dictionary of Missiology, "The satellites of Propaganda Fide: the Urban College and the Polyglot Printing House" by Giovanni Pizzorusso) (Agenzia Fides, 16/11/2022)