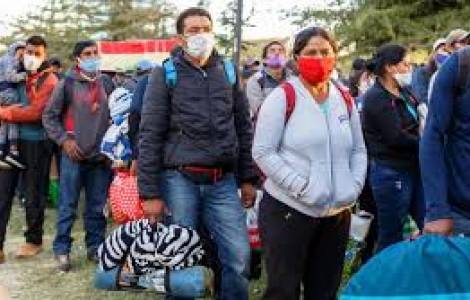 Santiago (Agenzia Fides) - "One of our goals is to ensure the regular residence of migrants and refugees and to repair the damage caused by the historical delays of recent years. We want to give people information and the opportunity to do this to find out the status of their application process and to be able to complete it... As a second necessity, we also want to bring the labor market in line with the migration policy in order to meet the productive needs of the country... because the integration into the labor market solves many problems of migration and social cohesion in the affected areas", said Luis Thayer, Director of the Chilean Migration Service (SERMIG), during the XXII edition of Migration and Refugee Days held in Santiago on November 10th and 11th to implement the new Migration Law.
Thayer stressed that from April, when the new government took office, to September, all 200,000 pending temporary visa applications were released, and of the 300,000 pending permanent resident visa applications, about 70,000 were processed. He also stressed that the new immigration law is solid in terms of respect for human rights and represents a major step forward for the state as it completely transforms the migration system with a multidisciplinary approach.
The Conference on Migration and Refugees is organized by the Chilean Catholic Institute for Migration (INCAMI), which aims to contribute to the national migration policy through discussions and collective knowledge. Representatives from the International Organization for Migration (IOM), the United Nations High Commissioner for Refugees (UNHCR), the Economic Commission for Latin America and the Caribbean (ECLAC), the Chilean Ministry of Foreign Affairs and National Migration Service, the Chilean Section of the Latin American Churches Network Red Clamor, the AVINA Foundation, the Chilean Citizens' Observatory and the CRISOL Project for Human Mobility and Rights will participate.
The initiative, launched in 1997, is based on the words of Pope Francis under the motto "Building the future with migrants and refugees" and since its first edition has aimed to involve various representatives of civil society organizations, central and local government agencies and bringing together international organizations and the private sector to reflect on migration policies, promoting the respect and fulfillment of the fundamental, political, social and cultural rights of migrants and refugees in a national and international multicultural context.
Significant contributions are expected this year to the development of new structures and systems to define an effective migration policy, the core of which is the new Immigration Law combined with the challenge of the new constitutional process.
The Catholic Institute for Migration expressed to the newly elected President of the Republic, Gabriel Boric, at the beginning of his term of office (March 11, 2022) the concerns of the institutions working on behalf of migrants regarding "the difficulties faced by the migrants arriving in our country in search of a better future continue to be exposed". The fact that many enter illegally does not make these people any less valuable. The Institute welcomed the new migration regime (Law 21.325/2021), but noted that there was a lack of clarity about the implementation process, delay in the procedures for legalizing migration status, leading to the presence of undocumented foreigners in the country who do not have access to constitutionally guaranteed rights such as work, health, education, housing and justice (see Fides, 31/3/2022).
In the referendum of September 4, 2022, the Chileans expressed their negative opinion on the draft of the new Constitution by a large majority (over 60%) (see Fides, 30/8/2022; 2/9/2022). On September 6, President Boric carried out a government reshuffle that involved five ministries, including the strategically important Ministry of the Interior. (SL) (Agenzia Fides, 10/11/2022)