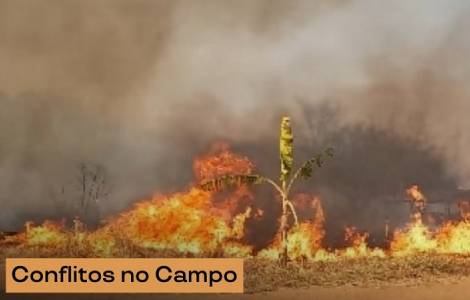 Brasilia (Agenzia Fides) - In the first half of 2022, 759 episodes of “no-camp” conflicts were recorded in Brazil, involving 113,654 families. These episodes correspond to 601 cases of land conflicts, 105 cases of conflicts over water, 42 cases of conflicts for work reasons (41 cases of slave labor and 1 case of exploitation), 10 cases of conflicts in the period of drought and 1 conflict in the mining area. The data collected and disseminated as usual by the Pastoral Land Commission (CPT) through the Dom Tomás Balduino Documentation Center, also reveal that more than half of the total conflicts recorded in the period took place in the Amazon.
Another particularly worrying figure is that of murders: in 2022, so far, the CPT has recorded 33 murders, 25 of which in the first half of the year alone. Compared to the first half of 2021, the total increase in the number of homicides is 150%, with the rate of 30.30% of homicides recorded this year related to firearms, the highest percentage since 2018. After the peak in 2020, when 60% of the murders were linked to the invasion of the territories, in 2022 this percentage is 16%. Of the 158 territories in which there were murders between 2016 and 2022, in at least 46% of the cases there was some firefight in the same period. Additionally, nearly a quarter of the recorded killings occurred in territories threatened with judicial eviction.
The CPT draws attention to the fact that in recent years even children and adolescents have come under the crosshairs of this type of violence: from 2019 to 2022, 7 children and adolescents were killed, of these 4 were indigenous. The report underlines that in addition to the seriousness of the murder of children and young people, it is also necessary to reflect on the attempt to assassinate the future of the country and the future of the permanence of the original peoples and peasants in their territories.
Violence against people has been recorded in all areas of conflict considered by the CPT, mostly involving land conflicts. The main types of violence, in the first half of 2022, were recorded in prisons (16.82% of the total), followed by attempted murder (10.28%), intimidation (9.35%) and the death threat (9.35%). In the first half of 2022, the CPT registered 74 women victims of violence. Five women were killed, the highest number recorded since 2016. The main types of violence were death threat (21.62% of the total), followed by intimidation (18.92%) and attempted murder (10 , 81%).
Data from the first half of 2022 indicate a increasing trend of people freed from slavery-like working conditions and the largest number of women freed in the last 10 years (743). As regards the number of cases of slave labor, during the first half of 2022 (there were 41) there was a decrease compared to the same period in 2021 (61). (SL) (Agenzia Fides, 25/10/2022)