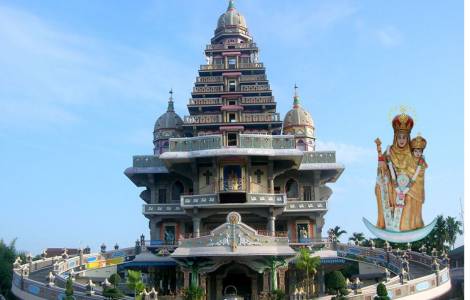 Jakarta (Agenzia Fides) - The Marian shrine "Graha Maria Annai Velangkanni" in the Indonesian city of Medan, in the north of the island of Sumatra, looks from the outside like a Buddhist temple with Indian and Chinese elements. The title "Annai Velangkanni" comes from the Tamil language and means "Mother of Velankanni", after the well-known Indian Marian shrine in Tamil Nadu. The Indian Jesuit Father James Barathaputra, who worked as a missionary in Indonesia for over 50 years and initiated the construction of the shrine in Medan, wanted to create a place there that was open to all cultures and traditions. The church, which opened in 2005, "wants to proclaim the good news of Jesus and to promote devotion to Mary. I thought of a place where everyone could feel at home and seek peace, consolation and healing from Mary our Mother," explained the Jesuit.
It is one of the most picturesque Marian shrines in Indonesia and is very popular today. Indonesian Catholics have a deep devotion to Our Lady, which is particularly evident in the Marian months of May and October. Marian shrines in Indonesia's 36 dioceses have again been the destination of many pilgrims since the end of the restrictions imposed by the pandemic these months, taking part in pilgrimages and visits to churches, shrines and the nearest Marian grottos throughout the archipelago. Catholic parishes, communities and groups organize such pilgrimages to the most important centers of Marian devotion, in which the Rosary is also a special focus.
On the island of Java, the main island of the archipelago, in Yogyakarta in (Diocese of Semarang) is the Marian Shrine of Sendangsono with the oldest Lourdes Grotto in Indonesia, consecrated on December 8, 1927. It was also here that the first group of Javanese were baptized by Jesuit missionary Father Van Lith (SJ). About 35 km south of Semarang, in Kerep Ambarawa stands a 30 meter high statue of Mary which was erected in 1954 on the occasion of the Marian Year proclaimed by the Pope to commemorate the anniversary of the dogma of the Immaculate Conception. Further east is Poh Sarang, a small, remote village on the slopes of Mount Klothok in the Kediri region. There is also a Lourdes grotto here, which is also visited by believers of other religions. In addition to St. Mary's Grotto, the 'Small House of the Rosary' is also located here, and the region's Catholics traditionally gather on the hill for the Stations of the Cross. In the Diocese of Bogor in western Java, believers also come from Jakarta to pray the Rosary in the Marian Shrine of the Immaculate Conception on Canadian Hill in the Banten region, which was built here in 1988 by the Franciscan nuns from Sakabuini, while the Marian Shrine in Sawer Rahmat (Kuningan) in Bandung Diocese was established in 1990 by local rural people. It can be reached via a path with Stations of the Cross.
On the island of Flores, the Catholic heart of Indonesia, there is a Marian pilgrimage site. In the Diocese of Maumere, near the village of Wuli Wutik, on the top of a hill stands the 28 meter high statue of "Mary, Mother of All Nations", erected here by the Passionists next to a Spirituality Center. The village is a fraction of the city of Nile which means "light". The faithful see in Mary "the light that guides and protects the peoples of the earth".
In Belu on the island of Timor there is also an imposing statue of Mary in a bay called "Octopus Bay". From here pilgrims can admire the beautiful sunset over the sea and the faithful pause to contemplate the wonders of creation and go "ad Jesum per Mariam" as Saint Louis Marie Grignion de Montfort said, author of the “Treatise on the true devotion to the Holy Virgin”, which Indonesian Catholics read and meditate on. (PA) (Agenzia Fides, 13/10/2022)

ASIA/PHILIPPINES - Catholics celebrate the feast of the "Black Nazarene", a moment of deep popular faith