ASIA/SOUTH KOREA - "It is time to take a step forward”: the Forum for Peace calls for a process of dialogue and reconciliation 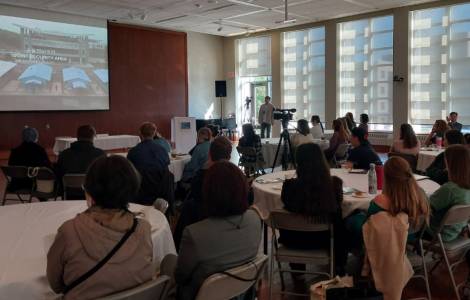 Seoul (Agenzia Fides) - As tensions rise on the Korean peninsula, and yesterday, October 9, North Korea launched two new short-range ballistic missiles towards the East Sea, cultural and political initiatives continue to flourish on the Korean peninsula aimed at restarting a process of dialogue. According to the Seoul government, this is the seventh missile launch in two weeks - one of which, a medium-range carrier, covered a distance of 4,500 kilometers.
In a climate of tension that is of particular concern to the governments of South Korea and Japan, the "Catholic Forum for Peace on the Korean Peninsula 2022" involved Church representatives in South Korea, Japan and the United States. Sponsored by the South Korean Ministry of Culture and the Catholic Institute for Peace in Northeast Asia (an institute in the Korean diocese of Uijeonbu, on the border between the Koreas), the Forum is the result of a partnership between the Catholic episcopates of Korea, USA and Japan, and is organized annually in turn by the three countries: in 2022 it was held in the United States, in 2023 it will be held in Japan.
Promoted by the National Reconciliation Committee of the Catholic Bishops of Korea and by the "Justice and Peace" Commission of the United States Bishops' Conference, the Forum was held in recent days at the Catholic University of America in Washington and sought to relaunch a different perspective in bilateral relations between North and South Korea.
As Fides learned, the Forum, focused on the theme "Resolution of the difficulties for peace on the Korean peninsula", was attended by Bishops and ecclesial representatives from South Korea, Japan, the United States, as well as numerous scholars, academics, government officials, who tried to analyze the main issues and knots related to peace on the Korean peninsula, taking into account the historical and geopolitical context of the conflict and examining the role of the Catholic Church in the promotion of peace.
Those present expressed their conviction that "peace cannot be achieved through war and violence" and also shared the urgency of "finding creative measures of humanitarian aid for the people of North Korea".
In addition, the bishops have recalled Pope Francis' calls for reconciliation on the peninsula, pointing out that "as Christians we must tear down the walls, if there are any, and heal the wounds with love". The American prelates said that "they will pray together with their Korean and Japanese brothers, asking for courage and perseverance on the path to peace on the Korean peninsula".
Msgr. Joo-Young Kim, bishop of Chuncheon, president of the "National Reconciliation Committee" of the Bishops of Korea, stressed that "the wounds of the conflict remain, but peace will be possible through forgiveness and reconciliation", and that " the Church cannot deviate from the path of peace, even if it is a long and difficult journey". The Prelate expressed gratitude "to those who are committed to peace on the Korean peninsula" and then recalled the prayer attributed to St. Francis, saying: "Lord, make us instruments of your peace".
According to prof. Baek Jang-hyeon, of the Catholic Institute for Peace in Northeast Asia, the role of the Catholic Church in the effort to build a world without nuclear weapons could be crucial in the process of denuclearizing the Korean peninsula.
The professors and representatives of the governments of Seoul and the US agreed on the way forward: to find a diplomatic and peaceful solution in relations with North Korea, confirming the denuclearization of the Korean peninsula as a common goal, thanks to cooperation with the international community.
Referring to the principles of the Church's social doctrine,
those present recalled that greater efforts are needed when the situation is negative, and that "now is the time to take a step forward in building peace". (PA) (Agenzia Fides, 10/10/2022)