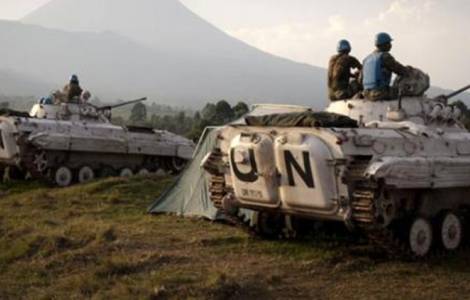 Kinshasa (Agenzia Fides) - "We are ready and willing to withdraw". Thus, the head of the UN Mission in the Democratic Republic of Congo (MONUSCO), Bintou Keita, affirmed to the United Nations Security Council his willingness to work closely with the government of Kinshasa to accelerate the pace of the withdrawal of the UN force composed of 14,000 soldiers and policemen, deployed in the east of the DRC.
The decision, Keita specified, was determined by the worsening of the "crisis of confidence" towards MONUSCO by the local population, especially after the reappearance of the M23 rebel group in recent months. "This has provided a fertile ground for stigmatizing the force and sowing misinformation about our mission".
The protests of the local population, especially in North Kivu, against the "blue helmets" were catalysed by the conquest of the M23 of the town of Bunagana on 13 June. In Goma, the capital of North Kivu, protests were held at the end of September (see Fides, 26/9/2022).
In addition to Bunagana, there are several villages belonging to 4 different groupings that are in the hands of the M23 guerrillas, who are allegedly supported by Rwanda, as the Kinshasa government accuses.
A note sent to Agenzia Fides by the collective "Peace for Congo" states that "since November 2021, more than 150,000 people have fled their villages: some have taken refuge in Uganda, others have been hosted in families residing in areas protected by the government".
The note adds that "According to anonymous sources, M23 is recruiting new recruits in refugee camps set up in Uganda and Kenya, providing them with military training in the Chanzu area, in the heart of the Virunga National Park". Furthermore, "According to a provincial deputy elected in the territory of Rutshuru, three foreign currencies are used in the areas occupied by the M23. These are the Ugandan shilling, the Rwandan franc and the US dollar. The Congolese franc is not used".
On September 18, in an interview with RFI, UN Secretary General Antonio Guterres admitted that "the UN is unable to defeat the M23. The truth is that the M23 today is a modern army, with more advanced military equipment than that of MONUSCO”.
The M23 is a predominantly Tutsi armed group. Defeated in 2013 by the Congolese army in collaboration with the MONUSCO rapid intervention brigade, it took up arms again at the end of 2021, accusing the Congolese authorities of not respecting the peace agreements signed in 2013.
The UN, with its gradual withdrawal from the Congolese crisis, seems at the moment to pass the hand to two African initiatives to resolve it, led respectively by Kenya and Angola. However, the two countries have just emerged from the presidential elections and seem to have overshadowed the Congolese question. (L.M.) (Agenzia Fides, 6/10/2022)