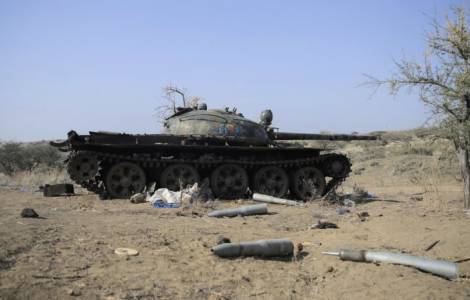 2022-12-05
Disengagement of the Tigrinya forces: silence of arms for a peaceful return to daily life

2022-12-03
In Tigray, disarmament is ready, but subject to the withdrawal of Eritrean and Amhara forces from the region

Addis Ababa (Agenzia Fides) - While the death toll of the drone attack against internally displaced people in Adi Daero, in western Tigray, registered on October 4, 2022, continues to increase, the president of the African Union Commission, Moussa Faki, has addressed an invitation to the representatives of the Ethiopian federal government and to the separatists of the Tigray region for a peace meeting convened in South Africa on Sunday, October 8, 2022.
The Ethiopian government said it was ready to meet with the aim of ending the fighting that has killed thousands of civilians and uprooted millions of people since November 2020, while no official response has yet been confirmed by the People's Liberation Front of Tigray. (TPLF) although, already last month, the rebels had declared that they were ready for a ceasefire and a peace process led by the African Union. In the initiative, the intergovernmental organization that includes all the countries of the African continent recognized by the international community did not consider it appropriate to involve the Eritreans, seen by many observers as an obstacle to the peace process. "Dialogue is the only way to end this deadly conflict", said Martin Griffiths, Undersecretary General for Humanitarian Affairs and Emergency Relief Coordinator.
For its part, the Catholic Church of Tigray has once again urged all Catholic networks and partners, national and international religious leaders, United Nations agencies, organizations, democratic governments, the international community, to condemn the conflict and reach out to the exhausted population with all available means. The Bishop of the Catholic eparchy of Adigrat, Tesfaselassie Medhin, has called on the international community to become aware that the one in Tigray is the largest active war going on on our planet right now, which is devouring the largest number of human lives. The urgency is to stop the indiscriminate bombing of innocent civilians and allow free humanitarian access to all parts of Tigray, as well as restore all basic services, bring ceasefire and political dialogue to ensure lasting peace.
While the eyes of the world are on the war in Tigray, a silent conflict is ongoing in Oromia, which extends into the central-western and central-southern region of the country, where Prime Minister Abiy is conducting military operations against the Oromo liberation front (OLA) also by recruiting former members of the armed group. (AP/GF) (Agenzia Fides, 6/10/200)