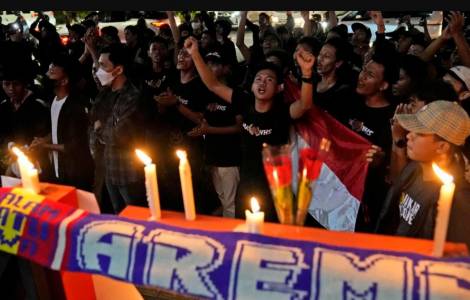 Jakarta (Agenzia Fides) - The day after the violence and the disaster in the stadium of Malang, in the eastern part of the island of Java, which caused 127 deaths (including a 5-year-old child), the Indonesian Catholic Church offers moral and material support, also to obtain justice, and gives spiritual comfort to the families of the victims. The tragedy was also remembered by Pope Francis after the Angelus on October 2, in St. Peter's Square.
Addressing a thought to the victims, the Pontiff said: "I also pray for those who lost their lives and were injured in the clashes that broke out after a football match in Malang in Indonesia".
According to the reconstructions, in Malang, in the province of East Java, on the evening of Saturday October 1, at the end of a football match in the city stadium, the fans of the Arema FC team stormed the field, after the defeat of the their team, who lost 3-2 to their greatest rivals Persebaya Surabaya. Police officers tried to get the fans to return to the stands using tear gas. A general escape and an impressive mob ensued, killing 127 people and injuring 323. Indonesian President Joko Widodo has ordered a review of the security plan for football matches, while the government and police will conduct "a thorough assessment of the incident".
Expressing the condolences of the Indonesian Catholic Church, Carmelite Bishop Henricus Pidyarto Gunawan, who leads the Catholic community in Malang, "entrusted families to the merciful God", while Father Hans Jeharut, Executive Secretary of the Commission of the Laity of the Indonesian Bishops' Conference, invited the Indonesian authorities "to carry out a full investigation and bring the perpetrators to justice".
Two Catholic priests from Malang shared their impressions the next day with Fides. Father Tedjo Soekarno, diocesan priest of Malang engaged in interreligious dialogue, observes: "Yesterday we witnessed a phenomenon that seriously worries me as a native citizen of Malang. We are constantly working to promote interreligious dialogue in East Java, with different ethnic and religious communities. Noting the animosity that generated the tragedy yesterday, we see today that there is a need to continue in the work of creating harmony at every level in society, to prevent all violence", remarks the priest,
Father Eko Aldianto O.Carm, also a native of Malang, in recent years executive secretary of the "Justice and Peace and Pastoral Care for Migrants" Commission of the Indonesian Bishops, agrees saying: "It is an unexpected tragedy that has left me stunned. We are speechless in the face of this absurd polarization, for a sports competition. Today we can pray for the families involved, but we must also reflect on what to do to ensure that every sports competition remains a confrontation in the name of loyalty, sacrifice, mutual respect, which is fun for the public, certainly not a moment of conflict or a harbinger of violence".
Rev. Gomar Gultom, President of the "Communion of Churches of Indonesia", which brings together the Protestant Christian communities, expressing deep condolences from all Indonesian Christians, remarked that "a sporting event cannot and must not end in a revolt that takes away the life of more than a hundred people". "This is an important lesson for the police and security, which the state must guarantee. Let's pray for the families of the victims and tell them: let's leave this case to the institutions and to justice", he said in order to avoid cross-vendettas among opposing supporters. (PA/MH) (Agenzia Fides, 3/10/2022)