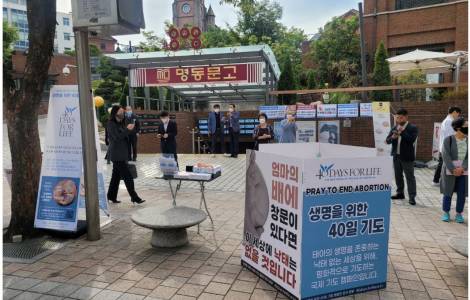 Seoul (Agenzia Fides) - The baptized Koreans in Seoul are taking part and participating with conviction in the "40 days of prayer for life" campaign that began on September 28 and will last until November 6. As reported to Agenzia Fides, the "Committee for Life" of the Archdiocese of Seoul, chaired by Archbishop Peter Chung Soon-Taick OCD, has publicly promoted the campaign - inviting all the faithful to participate - by organizing raising awareness in the streets of the city, in which the motivations are explained and an attempt is made to involve the population, especially Korean women. This is the second prayer campaign for life organized in the country this year, after the one that took place among the Catholic community from March 2 to April 10.
Catholics participating in "Committee for Life" activities have set up a cultural awareness and prayer point near Myeongdong Cathedral. The members of the Committee are available to explain to passersby the issue of respect for human life from conception, but also to provide psychological help to women who need it, have doubts or are considering having an abortion. While in the street, the faithful spend time praying the Rosary, entrusting to the Virgin Mary, the heavenly Mother, all work to defend, protect and promote human life.
The Korean Catholic Church has long fought for the protection of life and opposes the legalization of abortion in the country, defending the "sacredness of life" and teaching that human life must be protected "from the moment of conception ". In 2018, the Korean bishops launched a petition to discourage abortion that received a million signatures. In addition, in the Archdiocese of Seoul, Cardinal Nicholas Cheong created a special "Committee for Life" in 2005, with the task of promoting the values of life and family on a pastoral level, as well as on a cultural and public level. The Committee spreads the culture of respect for life, urging citizens to recognize the absolute value of all human life, an inestimable gift from God.
On April 11, 2019, the Korean Constitutional Court declared the law that had prohibited and illegalized the practice of voluntary termination of pregnancy in Korea since 1953 to be unconstitutional and called for legislative change. As of January 1, 2021, the abortion ban formally expired in South Korea, but this has created a loophole that Parliament has so far failed to close in a timely manner with a new law. Although the practice has been decriminalized, the absence of regulations establishing the practice to be followed means that, as an official from the Ministry of Health and Welfare recently stated, "abortion is currently neither legal nor illegal" in Korea.
It is in this background situation that the "Prayer for Life Campaign" promoted by the Korean Catholic Church, which, while legislators are studying a bill, expresses a formal request: "The Church will always defend human life, from conception to its natural end. That is why we ask that the future new law always allow conscientious objection in the matter of abortion," the Korean bishops wrote. (PA) (Agenzia Fides, 1/10/2022)