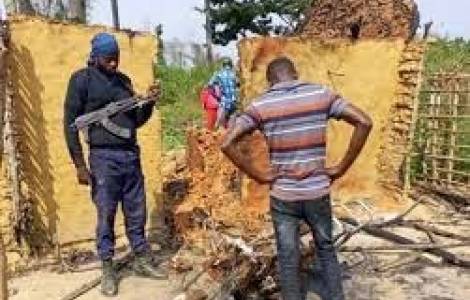 2022-12-03
National mourning for the massacre in a village in the east of the country; Sunday march for peace convened by the Bishops

2022-11-28
A march for peace: two women kidnapped by an armed group in the east of the Country

2022-11-10
Director of Justice and Peace of Butembo-Beni: "Is the population being massacred to clear out the territory in order to exploit its riches?"

2022-11-07
Cautious hope for a return of peace in South Kivu, but the situation in North Kivu and Ituri remains worrying

Kinshasa (Agenzia Fides) - "I was in Kwamouth, from September 23 to 26, to comfort our brothers and sisters who are going through difficult times of violence and suffering. The images bear witness to my closeness to these wounded populations who have not lost their joy and their faith", said Cardinal Fridolin Ambongo, Archbishop of Kinshasa, at the end of his visit to the territory of Kwamouth, about a hundred kilometers from the capital Kinshasa, in the province of Maï-Ndombe, in the southwest of the Democratic Republic of Congo (DRC), a territory marked by the inter-ethnic conflict between the Téké and the Yaka. For the Cardinal, the conflict stems from "an exaggerated desire for goods for oneself, for the family. We do not measure the consequences of the attitudes we show in relation to material goods".
The Cardinal's visit took place while violence in the province of Maï-Ndombe remains high. Conflict-related violence between the Teke and Yaka communities is no longer confined to Kwamouth territory and has spread to other areas. In recent days, the neighboring territory of Bagata has also been affected.
In the neighboring diocese of Kenge, on September 26, Bishop Jean-Pierre Kwambamba received the main customary chiefs of the Yaka and Téké peoples to try to resolve the conflict and ask for humanitarian
assistance. In fact, the conflict has spread to Kenge, which hosts several displaced people from the Kwamouth territory.
At least 50 soldiers have been killed in the clashes, while the conflict has already claimed the lives of more than 150 people and displaced much of the population.
The Téké settled decades ago on the sandy plateaus that stretch on both sides of the Congo River, establishing a system of government that was later adopted by other groups. The Yaka, also called the Bayaka, arrived in the area shortly after the Téké. These farmers grow cassava, peanuts, and sweet potatoes, and raise poultry and small animals. To exploit the lands belonging to the Téké, the Yaka must pay compensation to the customary Téké chiefs. It is an agreement that has allowed the two communities to coexist peacefully for years.
But for some time now, this mechanism has stopped working and the Téké accuse the Yaka of failing to pay the usual fee. In early August, members of the two communities clashed at gunpoint, especially in the town of Kwamouth. Since then, the clashes have intensified, including the use of firearms, as reported by MP Guy Musomo, who wonders who has supplied these weapons to the two groups. The latest clashes date back to September 21 and 22, with the death of 80 people in the villages of Bibonga, Engweme and Bisiala. (L.M.) (Agenzia Fides, 29/9/2022)