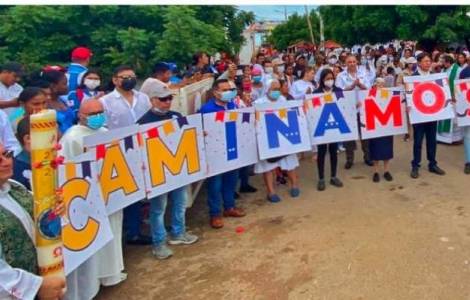 2022-11-23
Thousands of Venezuelans, Haitians and Ecuadorians face "the hell of Darién" in order to escape poverty and violence

2022-11-21
Dialogue and hope for peace: talks with the ELN resume in Caracas, the IX Reconciliation Congress in Bogota

2022-10-14
After the opening of the borders: Bishops of Venezuela and Colombia discuss migration and warn of a humanitarian crisis

2022-10-08
Archbishop Dal Toso: vocations in the areas to be evangelized are the "ripe fruit" of the first proclamation

Paraguachón (Agenzia Fides) - More than 700 people from Colombia and Venezuela gathered at the invitation of the Catholic Church in the border town of Paraguachón, the last Colombian town before the border with Venezuela, in the Guajira region, to pray with the residents of the surrounding towns as part of the 108th World Migrants and Refugees Day to commemorate the 200th anniversary of the Colombia-Venezuelan border. The celebration was attended by high-ranking church representatives and Caritas delegates from both countries. Also present was Ms. Vanessa Linares, representing the Port Authority of Maracaibo (Venezuela), and the Mayor of Maicao (Colombia), Mohamad Dasuki. Both paid tribute to the initiative launched by the Catholic Church in the spirit of brotherhood.
At the beginning of the meeting, Archbishop José Luis Azuaje of Maracaibo (Venezuela) and Monsignor Francisco Antonio Ceballos of Riohacha (Colombia) exchanged a lit Easter candle and salt in a sign of brotherhood. This gesture is also to be understood as "a joint response to the call of our Lord Jesus Christ to be 'salt of the earth and light of the world'".
The Venezuelan and Colombian delegations then met to share this year's motto "Walking the journey together" in preparation for the Eucharistic celebration dedicated to Bishop Francisco Ceballos of Riohacha. The bishop pointed out that this meeting took place in the so-called "no man's land" and added: "We are here in Paraguachón, on the border, to celebrate the 108th World Day of Migrants and Refugees. We have come to this symbolic place, to deliver the message of Pope Francis to welcome and accompany the migrants and refugees.There are many who have come to Colombia to find a better chance and live here. But they don't want to just live, but live with dignity".
Father Rafael Castillo Torres, director of Caritas Colombia, recalled the unity between the two peoples: "How beautiful it is that today we can thank God that we are a people on the journey, a community on the journey, and that the Holy Father's message today 'Shaping the future with migrants and refugees' brings light, truth and hope to our peoples".
Meanwhile, in relations between the two countries, the recent reopening of the international Simon Bolivar Bridge after seven years of closure is considered a milestone. It is the main land link between Colombia and Venezuela and marks a border of great economic importance. The symbolic act on September 26 was attended by Colombian President Gustavo Petro, Tachira State Governor Freddy Bernal and the Ministers of Transport and Industry.
On August 19, 2015, Venezuelan President Maduro ordered the border with Colombia to be closed, claiming to prevent the entry of Colombian paramilitaries and to combat smuggling; at the same time, a thousand Colombians were expelled and the border militarized. Later, the same President authorized the opening of the Bridge for a few hours, allowing thousands of Venezuelans to reach the nearest towns to buy food, medicine and essential necessities, which were now in short supply in their country.
The Presidency of CELAM and the Episcopal Conferences of the two countries have repeatedly recalled that the two peoples have always been distinguished by their brotherhood, solidarity and unity, and in this context lamented that the measures taken were the poorest and weakest sectors in both Colombia and Venezuela. On several occasions they have publicly called on the Presidents of both countries to meet for a dialogue that should allow for concrete and long-term agreements (see Fides, 1 and 5/9/2015). (SL) (Agenzia Fides, 29/9/2022)