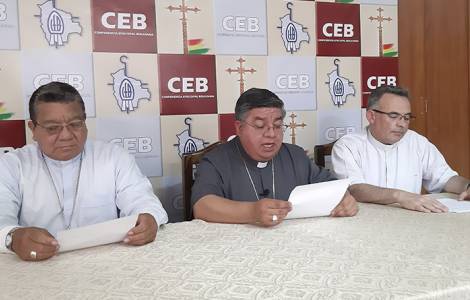 Cochabamba (Agenzia Fides) - "It is a general feeling of the population that the Ombudsman's Office, which is an institution that must ensure compliance with individual and collective human rights of all Bolivians, has been losing legitimacy and credibility in in recent years for his questionable impartiality, for his silence in the face of major social conflicts in which his actions were not made visible, and for the violation of the rights of children and adolescents and attempts against human life". This is stated by the Permanent Episcopal Council of the Bolivian Episcopal Conference in a statement entitled "Bolivia needs a Defender", citing the exhortation of the Apostle Paul: "Put put on the new self, created in God's way in righteousness and holiness of truth" ( Eph 4,24).
The Ombudsman's Office is an institution created by constitutional mandate on December 30, 1997, through Law No. 1818. Its function is to ensure respect, promotion and compliance with human rights, both individual and collective, especially of the most vulnerable and disadvantaged sectors of society, as stated in the Political Constitution of the State, in laws and international instruments. The Office is currently governed by Law No. 870, enacted on December 13, 2016.
According to news collected by Agenzia Fides, the new Ombudsman of Bolivia, Pedro Callisaya, took office yesterday, September 27, declaring in his investiture speech that he wishes to recover the independence and credibility of this institution. His election took place in a controversial session of Parliament, with a change in the agenda and the absence of several opposition deputies. The opposition party 'We Believe' petitioned the Speaker of Parliament asking for Callisaya's appointment to be reconsidered.
In their statement made public yesterday, the Bolivian bishops recall that "the election of the position of Ombudsman must be carried out in a consensual and democratic manner, with the support of all the political and social forces in the country so that he feels the support and the support of all citizens. They also point out that "Our democracy is fragile, and we must seek to strengthen it, since we are far from consolidating a democracy with strong and deep foundations. We cannot continue to encourage a weak democracy".
The text reiterates that the role of the Ombudsman involves "the impartial defense of the human rights of all Bolivians", therefore the designated person should have a clear vocation "to serve the community, without political preferences", "if the new Ombudsman does not address the central issues that afflict Bolivia, doubts about his identity as an Ombudsman will increase".
The Permanent Episcopal Council of the Episcopal Conference ends its statement expressing the hope that the Ombudsman can truly be "the voice of the People" and address the urgent needs of the people of Bolivia within the framework of respect and the common good. "Let's sow solidarity and dialogue, let's sow respectful closeness among all Bolivians, may God bless us and allow us to continue advancing as a Church and as a society". (SL) (Agenzia Fides, 28/9/2022)