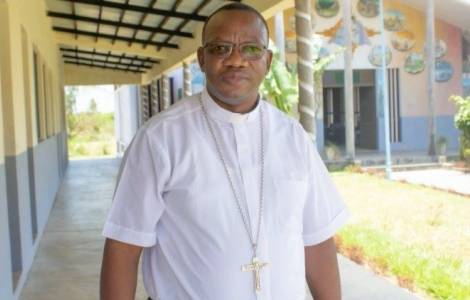 Maputo (Agenzia Fides) - "There cannot be first class and second class victims". "The response to jihadists cannot be solely military but it is necessary to give hope to young people who would otherwise be tempted to recruit into jihadist ranks". These are some of the statements released by Msgr. Juliasse Ferreira Sandramo, Bishop of Pemba, a diocese located in Cabo Delgado, the northern province of Mozambique destabilized for several years by rebels who have joined the Islamic State.
The jihadist insurgency has recently spread to the neighboring province of Nampula, where during the assault on the Chipene mission on the evening of September 6, Sister Maria De Coppi, among others, was killed (see Fides, 7/9/2022).
Msgr. Sandramo, who is visiting Portugal, explained that since the start of the war in Ukraine, the lack of support from the World Food Program (WFP) is felt in Cabo Delgado. So far, the Bishop underlines, WFP has done an extraordinary job, bringing humanitarian aid to areas that are in urgent need, achieving an exceptional result: no deaths due to starvation among those displaced by violence. The end of aid, however, puts more than 850,000 displaced people at risk, says the Bishop of Pemba, pointing out that 8,000 new displaced people have been added following the latest attacks.
"Without the help of the international community, nothing can be done", says Msgr. Sandramo, who stresses that Mozambique must remain a global priority. "There can be no first and second class victims."
As for the resolution of the conflict, the Bishop of Pemba considers that the strategy followed until now, which consists in approaching it only from a military point of view, is wrong. It is important to "offer horizons" to young people, potential recruitment targets for jihadists. “It is essential to create jobs, to eliminate poverty, to provide opportunities", says Msgr. Sandramo because "we must prevent people from getting lost, creating hope". "An exclusively military response may eliminate two, three or four jihadists, but it will not prevent new recruitments."
For the Bishop of Pemba, a great work of prevention is necessary, integrating the living forces, namely religious leaders and local leaders. "The government should adopt a more forward-looking approach and speak to Muslim and Catholic leaders," said the bishop, who recalls that he "has never been called to a meeting" with the authorities to consider resolving the conflict.
The food problem is not the only one that needs to be addressed. There are resettlement difficulties and psychological problems. The violence has led to the closure of many schools and health centers. In the reception centers for displaced people, the schools prepared to receive 1,000 children must now receive 3,000. And many children do not even have the motivation to go to school. The youngest are deprived of a future. (L.M.) (Agenzia Fides, 14/9/2022)