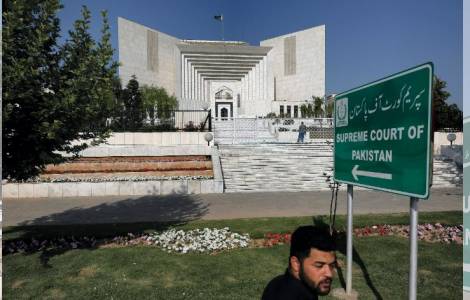 Islamabad (Agenzia Fides) - "We welcome the decision of the Supreme Court of Pakistan which asks the Government to be more careful in dealing with blasphemy cases. We recall the misuse of blasphemy laws in the last two decades. This is a serious concern for Christians, Hindus and other religious minorities in Pakistan. It is very important that police and government officials handle cases of blasphemy with great care, so that no innocent person is incriminated", said Sabir Michael, a Catholic involved in civil society, to Fides, commenting on the recent Supreme Court ruling in Pakistan which ordered the state to be very diligent in dealing with cases of blasphemy.
In the detailed decision issued in early September (see Fides, 1/9/2022) the supreme body of the Pakistani judiciary expressly asks state officials to exercise "the utmost caution" and acknowledges the problems and exploitation of this legislation.
In a nine-page text, consulted by Fides, the panel of judges composed of Judge Qazi Faez Isa and Judge Syed Mansoor Ali Shah notes that blasphemy cases receive a lot of attention and publicity, which can have the effect of compromising the conduct of a fair and regular legal process. Judges take note of cases where false accusations of blasphemy are made to settle personal accounts or accusations of blasphemy are made for ulterior motives. Judge Isa emphasizes that the prosecution should never be influenced by "zeal or moral outrage", but that the state, that is, the prosecutor, "must carry out a meticulous and diligent investigation into the alleged crime in these disputes".
The Court states that, in accordance with the principles of Islamic jurisprudence and in application of constitutional law, care must always be taken to ensure that an innocent person is not wrongfully convicted of crimes related to religion, in particular "when there is only the improbable oral testimony of witnesses". The judgment notes that "the defendant's fundamental right to a fair trial must be guaranteed", noting that "there have been cases where an angry mob injured or even killed a defendant before he was found guilty".
"The law forbids taking justice into one's own hands. In Islamic jurisprudence, even if a person has been found guilty and sentenced to death, the sentence can only be carried out by those who are authorized to do so, and if they kill the convicted person, the offender must be punished", explains the court in its judgment. The text also recalls that preaching Christianity is not a crime in Pakistan, but "it is a fundamental right of every citizen to profess, practice and propagate his religion".
According to Sabir Michael, "this judgment is a beacon of hope, and will serve to convince state officials to be more careful in handling blasphemy cases." Ilyas Samuel, a Christian involved in organizations that promote human rights, notes to Fides: "In light of the growing incidents of extremism, this is an excellent decision by the Supreme Court to improve the image of Pakistan at the international level".
Nasir Raza, a Christian and media professional, says: "It was a necessary decision. We pray for its implementation, so that innocent people will no longer be victims of accusations of blasphemy, as has happened in notorious cases such as that of the Christian Asia Bibi, and so many others".
According to the Center for Social Justice, an NGO which monitors the phenomenon, 1,949 people were charged under blasphemy laws between 1987 and 2021. This number includes 928 Muslims, 643 Ahmadis, 281 Christians, 42 Hindus and 55 citizens of unknown faith. (PA/AG) (Agenzia Fides, 14/9/2022)