VATICAN - Gianni Valente is the new Director of Fides Agency 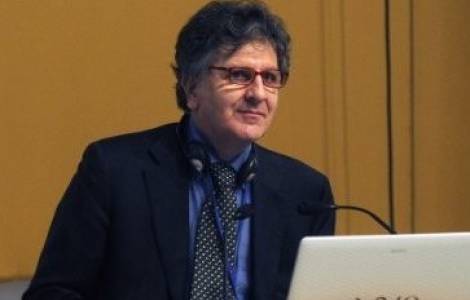 Rome (Agenzia Fides) - This morning, Saturday September 10, during a brief meeting held in a room of the Palace of Propaganda Fide, Cardinal Luis Antonio G. Tagle conferred the appointment as new Director of Fides Agency to Gianni Valente, already editor of the Agency.
The meeting was also attended by Archbishop Giampietro Dal Toso and Father Dinh Anh Nhue Nguyen, OFM Conv, Secretary General of the Pontifical Missionary Union (PMU), currently Director of Fides, as well as several members of the Agency's editorial staff.
Gianni Valente was born in Rome, where he has always lived. He was baptized on May 26, 1963 (feast of Saint Philip Neri) in the Church of the Immaculate, in San Lorenzo neighbourhood. He graduated in History of the Christian East at the Faculty of Letters and Philosophy of the II University of Rome Tor Vergata, discussing a thesis on the participation of the Malabar and Malankara bishops in the Second Vatican Ecumenical Council.
In May 1989, he began working on the monthly magazine “30Giorni nella Chiesa e nel mondo” (30 Days in the Church and in the World), a magazine animated by the faith of Don Giacomo Tantardini (1946-2012), a Lombard priest who had lived his priestly vocation in Rome since the early 1970s. Valente became a professional journalist in 1992. From 1993 to 2012, the year of its closure, the magazine 30Giorni was run by Senator Giulio Andreotti (1919-2013).
Since 1993 Gianni Valente has been married to Stefania Falasca, a journalist of the Catholic daily Avvenire and essayist, Vice-President of the John Paul I Vatican Foundation, chaired by Cardinal Secretary of State Pietro Parolin. Gianni and Stefania have two children, Paolo and Cecilia.
Since September 2012, Valente has been working at the missionary Fides Agency, in the building of Propaganda Fide. As an editor for the Agency, he has mainly written articles on the affairs of Christian communities and the countries of North Africa and the Middle East.
Over the years, Gianni Valente has written books and essays such as 'Il Tesoro che fiorisce. Storie di cristiani in Cina' (The Treasure that Blooms. Stories of Christians in China) (Rome, 2002), 'Ratzinger Professore' (Ratzinger Professor) (Cinisello B., 2008), 'Ratzinger al Vaticano II' (Cinisello B., 2013). In 2013, the Emi publishing house collected in the small volume 'Francesco, un Papa alla fine del mondo' (Francis, a Pope at the end of the world), the interviews granted between 2002 and 2009 to Gianni Valente and his wife Stefania by Jorge Mario Bergoglio, then Archbishop of Buenos Aires, previously published in the magazine 30Giorni.
After the Extraordinary Missionary Month of October 2019, Valente conducted an interview with Pope Francis dedicated to the theme of mission, published in its entirety in the volume "Without him we can do nothing". Being missionaries in today's world" (Libreria Editrice Vaticana, Rome, 2019).
(Agenzia Fides, 10/9/2022)