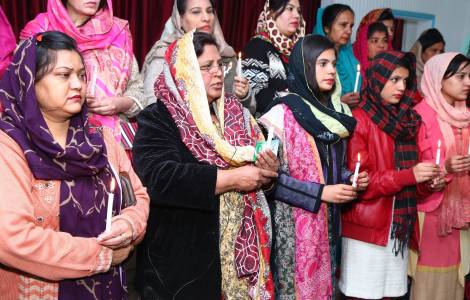 Karachi (Agenzia Fides) - "We must give thanks to God for our beautiful country; we, as a Christian community, have contributed much to its development over the past 75 years since Pakistan's independence. Our Christian politicians have played an important role in the campaign for the founding of Pakistan alongside Muhammad Ali Jinnah, the country's founderfor a country where all enjoy equal rights and where we can live freely and profess our faith. We, people of different faiths than the majority, are called to work together for the development of this country and for the betterment of the country as a nation.
Let us continue this journey of service to Pakistan with enthusiasm and devotion, without any discrimination based on race, caste, creed, and the message of the Founding Father to help the people of this country live in unity, peace and harmony", said Archbishop Sebastian Francis Shaw OFM, Archbishop of Lahore to Fides on the occasion of the recent 75th anniversary of Pakistan's independence on 14 August 2022 with reference to the Day for minorities, celebrated on August 11.
Msgr. Shaw also says in this regard: "We must do more to work together and build new colleges and universities, centers for dialogue of peace and harmony between people of different faiths, to promote love, unity and peace in the country. We Christians in Pakistan have supported the decision to found Pakistan alongside Muhammad Ali Jinnah and we must continue our mission to build a Pakistan according to his vision: a nation where people of all faiths should live and work together for the benefit of our beloved homeland". "In a united India", the Archbishop recalls, "Muslims and Christians were considered a minority; but according to Jinnah's vision, religion should now be a private matter for people, and people of all faiths should work together without discrimination for the development of the country".
The 75th anniversary of Pakistan's independence was also celebrated in the country's churches, where the faithful prayed for the government, armed forces, political parties and for the well-being, prosperity and development of Pakistan.
The President of the Pakistan Bishops' Conference, Archbishop Joseph Arshad of Islamabad - Rawalpindi told Fides: "We Christians in Pakistan have always served the country with dedication in the fields of education, health care and social work and we wish to continue this mission of the Church for the improvement of our beloved homeland. Pakistan's Independence Day always reminds us of the sacrifices of our ancestors who worked together to build Pakistan".
"Today," Archbishop Arshad said, "our country is facing social, political and financial challenges and due to inflation, life is very badly affected in our country. We are experiencing instability, insecurity, chaos and unrest. People are losing hope. Amidst of all these challenges, I call on political, social and religious leaders and all people to work together as a nation for the good of our country and the prosperity of our people."
Archbishop Benny Travas of Karachi recalls: "After the founding of Pakistan, the task of developing the country was immense, but all people, including Christians, got involved and played an important role, especially in opening schools, Universities, hospitals, outpatient clinics and rehabilitation centers". In the city of Karachi in particular, the archbishop said, "Christians, even if they are a small community, have been an important catalyst in building this city. Together we must create a great Pakistan where all people live in peace and for the development of the country". The archbishop also referred to the sacrifice of Catholic politician Shahbaz Bhatti and called on the faithful "to be ready for any sacrifice for our beloved homeland".
Pakistan gained independence on August 14, 1947 after partition from India, which was under British rule. Today it has 22 million inhabitants, of whom 96% are Muslims, 1.6% Hindus and 1.5% Christians. According to church statistics, a total of 1,348,950 Catholics lived in Pakistan in 2021. (AG/PA) (Agenzia Fides, 18/8/2022)