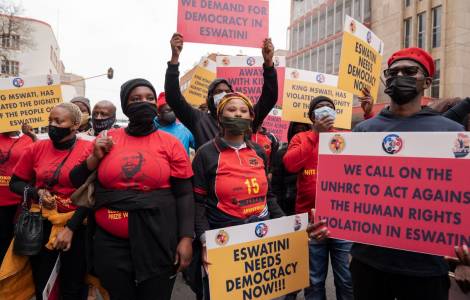 Manzini (Agenzia Fides) - "If I had to summarize the situation eSwatini finds itself in, I would use the term 'uncertainty'. This is the state of mind that best represents and characterizes the situation for some time and I've been talking about this for a long time by posting messages on social media: "We don't really know which way to go at the moment and nobody is talking about it much. When the violence broke out in June 2021, we as the Council of Christian Churches of Swaziland, spoke directly to the Prime Minister in charge, bringing the proposal to focus on dialogue, and were told that the best response to the tense situation was national dialogue. Months passed and in February the Finance Minister said he wanted to organize a high-level dialogue. Finally, we recently learned that a team had been selected to shape this dialogue. We are now in August and we are still waiting for news", said Father José Luís Gerardo Ponce de León, Consolata Missionary and Bishop of Manzini, the only diocese of eSwatini, interviewed by Fides. The conversation took place from Johannesburg, where the bishop was attending a session of the Southern African Bishops' Conference (SACBC). He explained the complicated situation in the small South African country which, just over a year ago as the last absolute monarchy in Africa, fell into chaos after mass demonstrations were repressed by the police, and is now trying to find its way back to normality.
The Prelate notes: "Twice the situation in eSwatini was supposed to be on the agenda of the Southern African Development Community (SADC) and both times it disappeared from the agenda. The meeting scheduled for July 19 with our authorities was cancelled, and a few days earlier we learned that eSwatini was not yet ready. On the contrary, the government claimed that they were ready and that the non-participation was not due to eSwatini's readiness. Again, there was no clear communication and people remain in the dark".
In the year that has passed since violence and clashes erupted, tensions remain latent. There is still social unrest in the country. "We can say that we are in a situation of low intensity violence - the Bishop continues - which reminds us that nothing has yet been resolved. A number of police officers were killed in broad daylight near Manzini. In March someone burned the library of a school near Mozambique, in one of the poorest areas of the country, and there are reports of buildings being set on fire from time to time. But it is not clear what is causing this. This seems to be a way of telling us that the matter is still unresolved. The perpetrators of the various attacks that have been carried out in the country in recent months are also unclear".
"When I was in Colombia, I took part in efforts to create a national dialogue," says the bishop, "the most important thing was to get to know the interlocutors, it was clear who were the leaders with whom to have a dialogue. Yes if the interlocutors do not agree, it is difficult to start a dialogue process. For its part, the government, since the riots broke out, has wanted to appear to be taking care of social problems and has tried to improve basic services and roads But there is a political cry that goes beyond the social cry and will not be heard. There is a risk that King Mswati III - who is going into ritual retirement and will not meet the public until at least February, March - in November is not available and everything is further postponed. There are also national elections to be held in 2023, which is a very important time. But even in this case, we do not know if there will be dialogue before the elections or if the elections will decide the future".
According to the prelate, the Catholic Church is directly committed to a peaceful path and an encounter that avoids violence and aims at national reconciliation: "As the Catholic Church, we have repeatedly tried to point out the importance of non-violence: Violence cannot be the answer to our situation. We regularly hold prayer meetings for peace and ask everyone to be builders of peace and harmony". The bishop also states: "In the meantime, a document has been drawn up that outlined a possible road map for the dialogue that SADC desired. In March last year this document was ready and we were told that all parties involved should have access to. The report is in the hands of the government but has never been presented to the people.
Meanwhile, the cry for the social situation is even more difficult than before.
The war in Ukraine has increased fuel prices by 100 percent and this has serious implications for us". The Bishop concludes that "another difficulty we are having to face is that related to the political system. According to some, the political system of the nation needs to be reconsidered. Many young people never took part in the process of drafting the 2005 Constitution and there are those who did not have the opportunity of expressing oneself. It is important to build together a future of justice and prosperity for the nation". (LA) (Agenzia Fides, 12/8/2022)