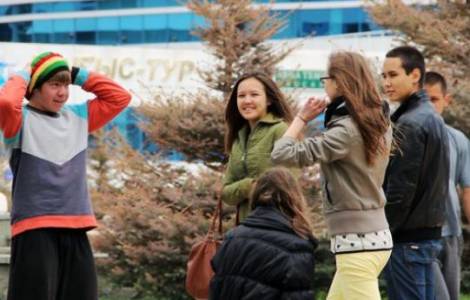 Shymkent (Agenzia Fides) - "Young people in the countries of Central Asia should know that they are not alone on their way to holiness, but that there are many of their peers who share the same ideals. They should know what it means to be committed Christians, a living example of faith in the midst of their culture, knowing that they live in a Muslim majority. That is why we organized a meeting at the beginning of August, in Shymkent, Kazakhstan between Uzbek, Tajik and Kazakh members of the 'Voice of the Word', a youth movement of the Institute of the Incarnate Word. They are young people who have committed themselves to living the example of Blessed Pier Giorgio Frassati and to being active in the apostolate and in formation", says Father Ariel Alvarez Toncovich, priest of the Institute of the Incarnate Word and parish priest of the Church of St. John the Baptist in Samarkand
(Uzbekistan) to Fides.
About 40 young people and seven religious from the Kazakh city of Shymkent, from Dushanbe (Tajikistan) and from the young group in Samarkand (Uzbekistan) took part in the initiative. The young people, says Father Toncovich, "lived days of formation and friendship. There were days dedicated to catechesis, while the last day was dedicated to rest and fun at the lake". "It is very important", stresses the missionary, "that they get to know each other, exchange experiences and see that it is possible to live as Christians, even in these countries. It is precisely for this reason that we have invited two girls who are completing their novitiate at Karaganda Monastery, as well as a couple who bore witness to what it means to be a Christian family in Central Asia. These are two different forms of vocation, but both are very rare in this area."
The priest is certain that the experience will bear many fruits: "The young people were visibly happy and enjoyed every moment to the full, from the catechesis to the football match. It was a fruitful initiative, which we noticed above all from the fact that the young people, whenever they had time, came to us religious to ask us for advice on their doubts, problems and dreams for the future", the missionary concludes.
Catholics are a minority in the countries of Central Asia, a Muslim-majority geographical area where the Church was reborn only after the collapse of the Soviet Union and the consequent end of religious persecution. Today there are 70 parishes in Kazakhstan, 5 in Uzbekistan, 3 in Kyrgyzstan, 2 in Tajikistan, while in Turkmenistan around 250 faithful gather in the Chapel of the Transfiguration of the Lord in the capital, Ashgabat. (LF/PA) (Agenzia Fides, 9/8/2022)

VATICAN - Pope Francis: intimacy with Jesus, the Good Shepherd, is the "soul" of every apostolic work