AFRICA/NIGERIA - Appeal of the Auxiliary Bishop of Minna: "Jungle justice". The country is on the path of disintegration 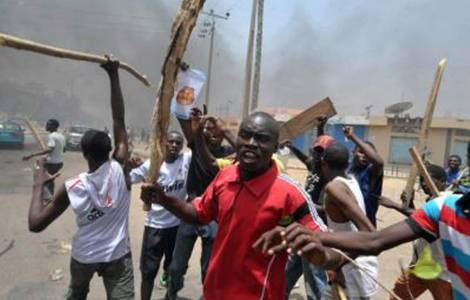 Minna (Agenzia Fides) - Violence continues to spread across the country, as well as kidnappings, killings, attacks on churches, clashes, and now even death threats against President Muhammadu Buhari.
This is how Msgr. Luka Sylvester Gopep, Auxiliary Bishop of Minna, describes the dramatic situation in an interview with Fides.
"The situation in Nigeria as a whole is very complicated", said the Bishop of the diocese located in the Middle Belt, the region of Nigeria that marks the border between the northern and southern parts of the country.
The interview in its entirety follows:

D) A situation characterized by growing violence which frequently affects Christian communities. Can you describe the origin of this violence?

A) The present state of violence in Nigeria began with a fundamentalist Islamic movement born in Maiduguri, the Capital City of Borno State called Boko Haram which literally means 'Western education is an abomination'. Its core teaching was to bring the social and developmental lives of the people in Nigeria under the authority and strict guidance of the Islamic Sharia Law. Boko Haram initially attacked government institutions but then began targeting Christians even outside Borno State. The Diocese of Minna which had been coexisting peacefully with the Islamic sects and groups in Niger State experienced a deadly attack in 2011. On that fateful Christmas Day, 25th December 2011, elements of the Boko Haram terrorist group attacked St Theresa’s Catholic Church, Madalla. More than 60 people were killed and many more were injured and maimed permanently.
Then the murderous activities of the Boko Haram group spread to other communities in North Central Nigeria including Abuja FCT. It was then they went beyond Christian churches and target to attack Mosques and communities with significant Muslim populations, as well as, socio-political institutions and groups.

D) But now there is not only Boko Haram to sow death and terror ...

A) Precisely. Now things have become even more complicated because we are no longer confronted by the Boko Haram terrorists but by groups of bandits, armed Fulani shepherds who raid communities to steal herds of cattle, killing people and raping women and also gangs of kidnappers committed to kidnapping for the purpose of financial and material extortion. In order words, the current situation in Nigeria has gone beyond religiously motivated violence and clashes. it is much more than that and highly complex. For example, kidnappings do not only concern Christians because Muslims and African Traditionalists are also victims of kidnappings. Take the scenario of the mass kidnapping of passengers on the Abuja-Kaduna train on March 28. Among those kidnapped were Christians and Muslims.

D) How is the situation in the Diocese of Minna?

A) In my diocese there are 16 parishes that are constantly subjected to heavy attacks by bands of kidnappers. The bandits arrive in these parishes even in broad daylight, capture entire families, leaving only the children, and take the adults away. Then they contact the relatives of the abductees to ask for ransoms. In some cases, some of the abductees died while some are maimed because of the harrowing experiences they pass through in the hands of the kidnappers. During the period when the bandits take away the people, their children are left alone in their homes and communities. As a Church we take on the task and responsibility of caring for these children, providing them with food and medical and psychological assistance.
If the ransom is paid, which is quite large, the abductees are released. But if nothing is paid, the kidnappers kill their victims. For example, two priests from the Archdiocese of Kaduna were killed by their kidnappers.
In some instances, some of our women and girls were kidnapped. Some of them were married off to the kidnappers, some were raped and some were sold off to other gangs for sex slavery. Some of our communities have been sacked by the incessant attacks of the bandits. The situation has created camps of refugees in different parts of Minna Diocese. The Church in Minna Diocese has taken up the duty of providing humanitarian assistance and emergency interventions for these our people irrespective of their religious affiliations.

D) How is it possible that gangs of criminals cannot be stopped?

A) It is unfortunate that the governments at the national and state levels in Nigeria have continued to pay lip service to the fight against insecurity. We are all witnesses to the haphazard efforts being made the government to get us to believe that our leaders are fighting insecurity and insurgency. We are still waiting for the time a person or group of persons will be arrested and charged to court for aiding and abetting insecurity or banditry in Nigeria.
It is most shocking that despite the fact we live in a technologically advanced era, the government of Nigeria has not been able to deploy any form of technological equipment to aid in finding the insurgents and the bandits terrorizing virtually every corner of Nigeria.
It is laughable that most of the victims of the train attack are still in captivity after four months. Recently, their captors even carried out an attack on the Nigerian Correctional Centre, Kuje to release some of their fellow insurgents in jail. Nobody has been arrested, nobody has been called to answer for it and nobody has resigned for failure to carry out his/her duty. Sometimes we hear that the government knows where the bandits are hiding. If that is true, why has nothing been done to arrest them or checkmate their deadly activities? Every Nigerian, except those in government, are wondering what our governments are doing. Some have even wondered aloud that maybe some of the government officials are part of the kidnapping and insecurity problems besieging us. Nobody can blame Nigerians for thinking this way because if some people in government do not know anything about the tragic situations, why have they not scaled up the fight against violence and arrest the criminals.
We all know that the government's primary duty is to protect the people who elected it. If our government alone is unable to guarantee the safety of Nigerians, why does it not ask for assistance from other countries? A paradox if we consider that our army is engaged in peacekeeping and assistance operations in various countries. Nigeria is good at helping neighboring countries to restore stability. Why is it not able to do this on its own national territory? These are the questions we ask the government that are not being answered.

D) Nigeria is a federal state. Are there differences in the approach to the problem between federal institutions and those of individual states?

A) The efforts of the Federal Government have been centred on utilizing the Nigerian Army and the Federal Nigeria Police Force. The success rate of these efforts has been largely minimal and in some instances, we suspect that there are members of the military and police that are colluding with the bandits while some are sympathetic to them. The below average performance of the federal security agencies made some state to begin quasi security outfits like the Amotekun in the Western part of Nigeria. These state-dependent vigilante groups which are also called the Civilian JTF in the Northern parts of Nigeria have recorded tremendous successes in combating the bandits. The biggest challenge they have is that they are poorly equipped to fight the bandits who have superior firearms. We know that the vigilante groups are made up of the locals trying to protect themselves and their loved ones.
On some occasions, we have witnessed the Federal security outfits working against the local vigilante groups. For instance, there are cases of suspected terrorists or bandits who were arrested by the vigilante groups and handed over to the Federal Police for prosecution but they disappeared without any trace. Such occasions have placed strains on the collaborative relationships between the police and the vigilante groups. Now we are witnessing the phenomenon of the so-called "justice of the jungle" which occurs when the local vigilante groups arrest bandits, they do not hand them over to the local authorities but carry out extrajudicial killings.

D) The Church has long warned that this situation is unsustainable and that Nigeria risks imploding. What happens to these appeals?

A) Since the current crisis was at its brewing stage, we, the Catholic Bishops in Nigeria, had been pointing out the impending dangers to the governments at all levels in Nigeria. Through our annual communiqués, meetings with political leaders and stakeholders and the sending of strong delegations to the government at different times, we issued continued to warn of the calamities that have befalling our country. In those instances, the national and state leaders promised to take note of our warnings and suggestions, but they did not fulfill their promises. As soon as they left the bishops, they went back to business as usual. In 2020, when the situation became most troubling and innocent citizens including priests were being murdered at will, the bishops mustered Catholic faithful and people of goodwill all over the federation and we embarked on a peaceful protest against the incessant killings in our land. All the times the bishops issued statements, they continued to remind our governments that their greatest duty is the protection of the lives and property of Nigerians. This we have done despite the rebuff of our appeals by men and women in leadership positions at the federal and state levels of government in Nigeria. The bishops cannot go beyond their pastoral missions as shepherds of the people of God to descend into the political arena of Nigeria. We will not get tired of carrying out our duties as citizens of our country Nigeria by advising the government when necessary and carrying out our numerous civic responsibilities. In Minna Diocese, the bishops go out to meet with the people who are suffering and displaced from their homelands to console them and assist them.
Let us note that presently many communities are forming local self-defence groups without resort to the state or federal authorities. This is a consequence of the government's inability to guarantee the safety of citizens and ideally speaking, it is a violation of the law. When local populations form self-defense militias it means that the government is losing legitimacy and control of the monopoly of force. If this continues, the country is on the way to disintegration. But the people in different communities are helpless in the face of increase violence and destruction of lives and property in their homelands. If nothing is done about this situation, I hope the politicians, who are only concerned about the forthcoming elections, will not have empty villages, towns and cities to rule when the elections are over in 2023. (AP/LM) (Agenzia Fides, 5/8/2022)